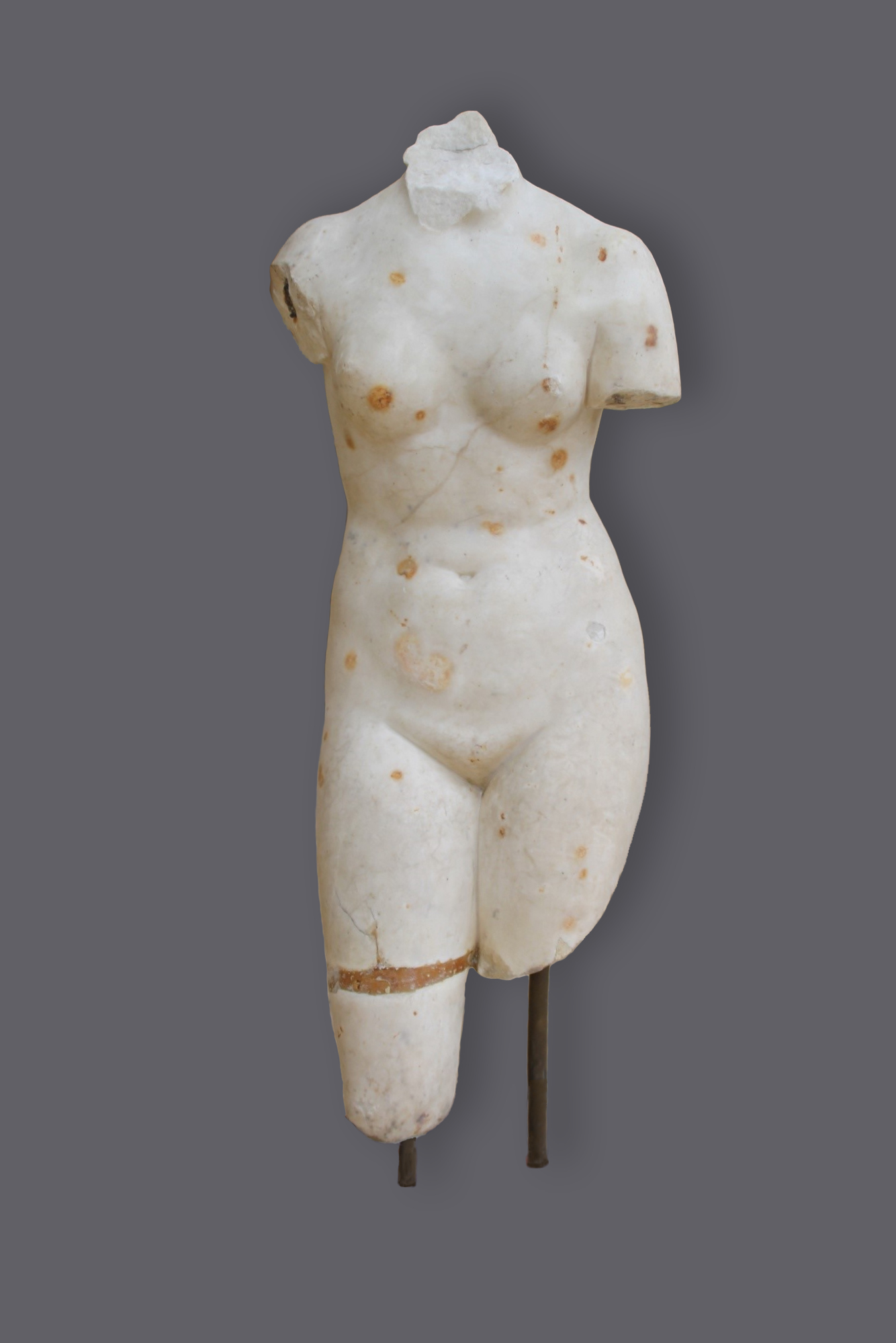 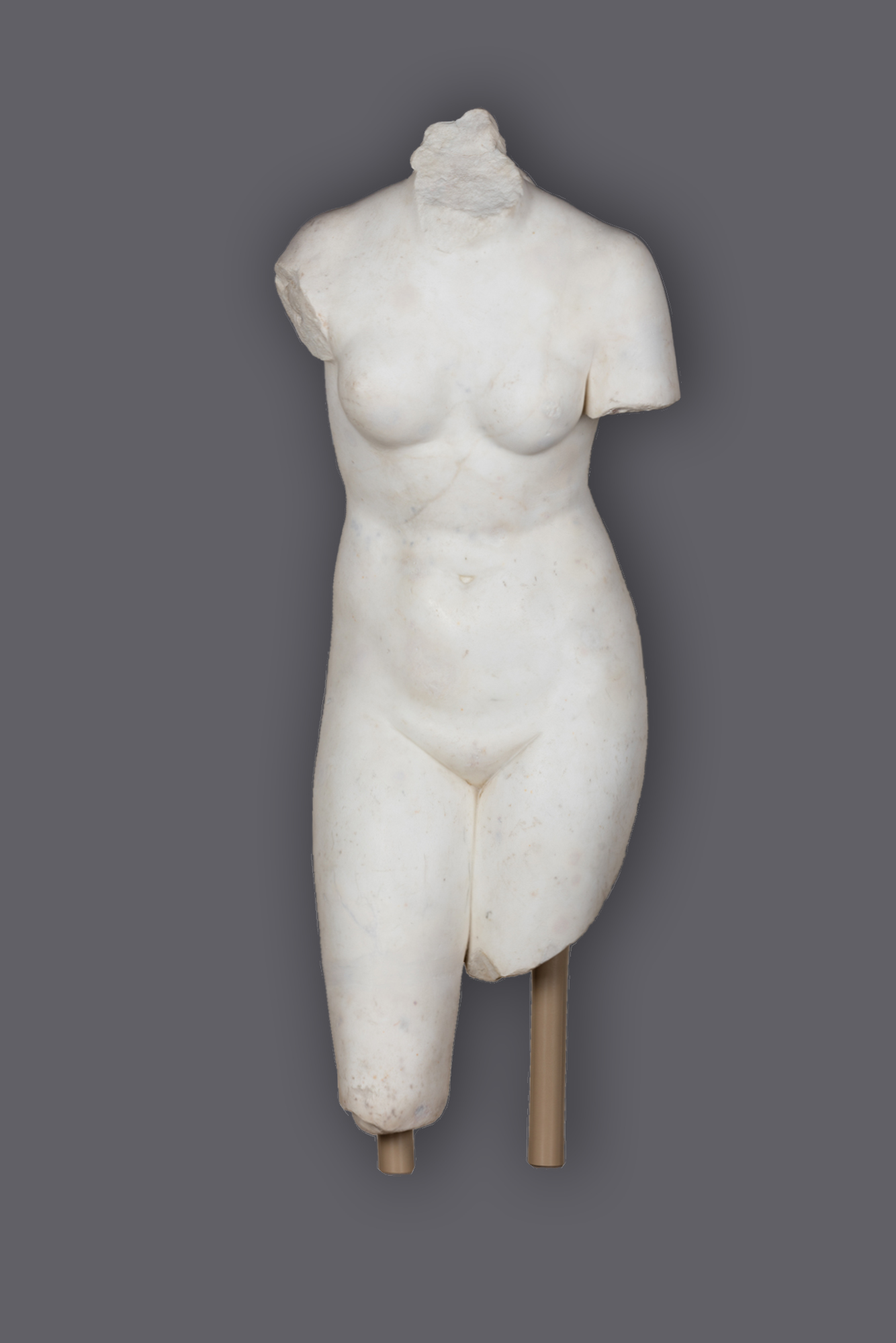 The marble torso of Aphrodite (Venus), the so-called Venus Khvoshchinsky, is not only one of the finest monuments of the antique collection of the Pushkin State Museum of Fine Arts, but also an iconic monument for the museum as a whole.

The torso of Aphrodite, named after the previous owner of the monument, is made of a single piece of white marble. Probably, the left hand of the sculpture was connected to the body with a bar or a peg, the hole for which remained on the left side. The marble surface is well polished and has a light shine. At the back of the goddess's neck strands of hair that have a rough surface was partially preserved. Subtle modelling of forms and beauty of proportions distinguish the sculpture. The contrast of textures on different sections of marble adds beauty and strength to the image.

The sculpture is preserved in fragments: the head and both arms are lost, the legs are not completely preserved. Only the torso of Aphrodite remains intact. But despite the significant losses, the object is likely to be attributed to the range of sculptures reproducing the statue of Venus de Medici. They are widely represented in museum collections. Perhaps the most famous one of them is in the Capitol Museum in Rome. Sculptures of this type depict Aphrodite with her head slightly turned, with one hand covering her chest, the other covering her bosom, and one of her legs, a bit bent at the knee, slightly protruding forward. In many images, at the feet of the sculpture attributes of the goddess – a dolphin or a vase – would be depicted. The Venus de Medici and related figures have their hair tied back in a bun.

Sculptures of this type have a wide dating. The torso of Venus Khvoshchinsky has also been dated differently. At the moment, the torso dates back to the 2nd century BC and is recognized as the work of a Greek master. According to the curator of the sculpture, Doctor Ludmila Akimova, "the performance differs from the Roman sense of form in very subtle modulations, and the flow of volumes".

The sculpture has been restored at least twice, perhaps three times:

1) N. A. Shcherbakov’s publication mentions that in 1924-1925 the restoration of Aphrodite's torso was performed by the restorer V. D. Sukhov and the assistant restorer, sculptor M. S. Rodionov. Probably, the results of this (first) restoration are reflected on the front photo published in the monograph of V. D. Blavatsky in 1939. It is noteworthy, that a fragment of the right leg is glued without the use of a peg, the seam is not filled, and the base of the sculpture is dark and has a prismatic shape.

2) On the photo in the album of reproductions of 1961, edited by G. Sokolov, one can already distinguish the existing base on which the sculpture is installed with the help of two pegs. On the front side of the thigh of the right leg can be seen a crack, presumably resulting from the installation of a metal pin. This image probably captured the results of the second restoration of the sculpture.

3) On the illustration from G. Sokolov's monograph of 1980 remain the same base and pegs, but new additions on the left leg are distinguishable. Moreover, the contamination spots have clearly lost their intensity, i.e. they are discoloured or toned.  Presumably, this photo belongs to the next stage of restoration. The catalogue of antique sculptures from the museum collection, published in 1987, provides a brief description of the restoration work, most likely also relating to the last restoration: "A part of the right thigh (with additional plastering) is restored, significant losses are repaired (using plastic), rust spots on the marble are partially discoloured. "

A few years ago, Aphrodite left her usual place in the hall of Antique art, because it became clear that she needs restoration once more. A team of restorers from the VNIIR, the Grabar Art conservation centre and the Pushkin State Museum of Fine Arts had been working for more than two years. It has recently returned to the permanent exhibition, to its former place in a transformed form, and is still the dominant monument of the hall of Antique art.