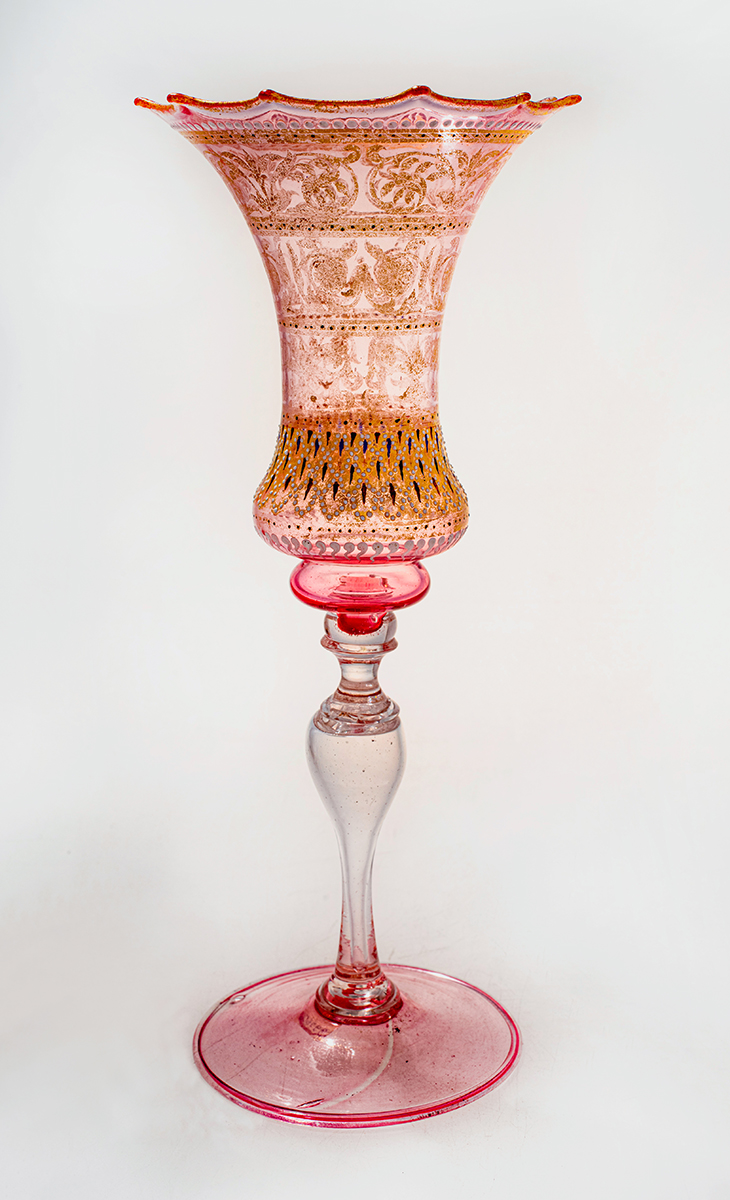 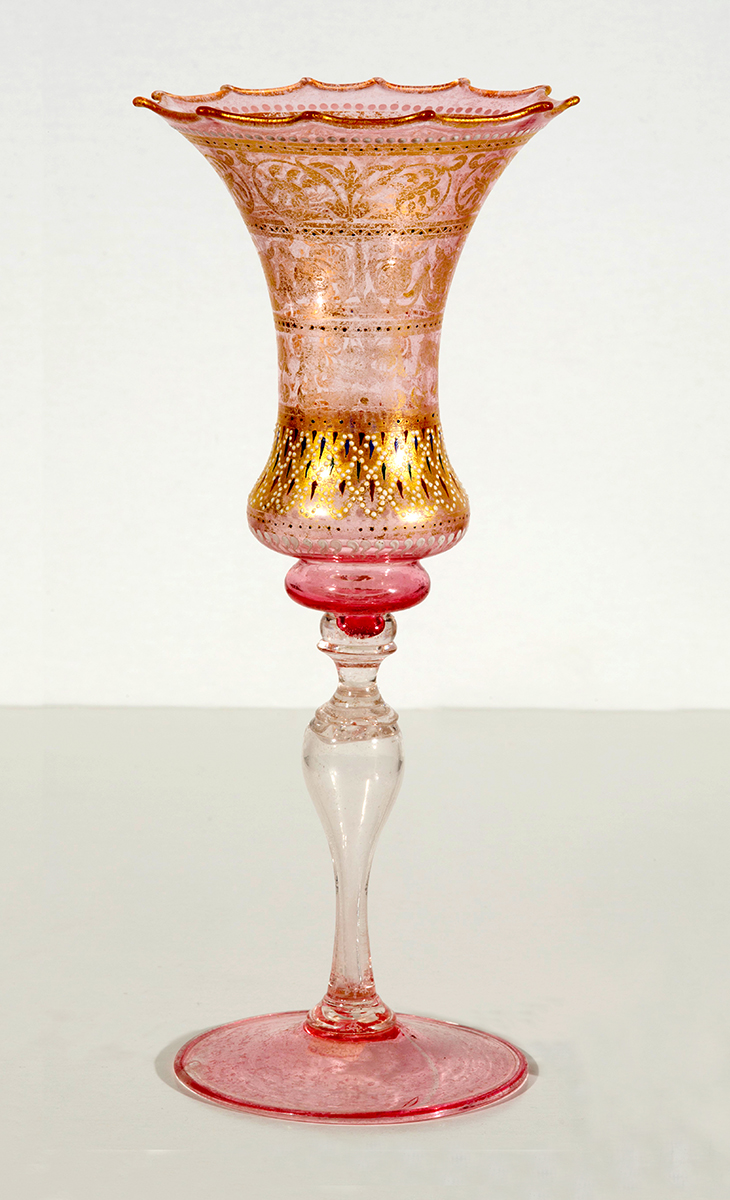 The department of private collections of the Pushkin State Museum of Fine Arts houses a magnificent Venetian goblet of pink glass painted with gold and enamels by Antonio Salviati (1816-1890).

The name of Antonio Salviati is associated with the revival of the Venetian glassmaking traditions of the 19th century and is known far beyond Italy. In Russia, the mosaics of glass smalt made by the artist for the residence of the imperial family in Livadia, the Cathedral of Alexander Nevsky in Yalta and the Church of the Intercession of the Holy Mother of God in Lower Oreanda have been preserved and survived to this day.

Antonio Salviati often created objects, in form and manufacturing techniques reminiscent of the products of the 16th-17th centuries. Such items include the goblet from the collection of the Pushkin State Museum of Fine Arts. Unfortunately, the time has not spared it. The magnificent gold painting, which once covered the entire vessel, is badly worn. The whole glass surface, as well the gold painting displayed semi-translucent crystals.

As a result of chemical tests carried out at the "IREA" research centre, we discovered that the goblet is made of soda glass, and the painting is made of enamel paints and 97% gold with a negligible admixture of 1.5% copper, which explains the poor preservation of the decor. The white plaque on the glass surface consists of sodium carbonate or hydrogen carbonate, i.e. the glass is leached.

Glass disease is often caused by "congenital" instability in the chemical composition of the original formula, as well as storing the object in unstable temperature and humidity. Once the damage has occurred, the decay processes are irreversible, but they can be slowed down by controlling the temperature and humidity of the room or a special cabinet where the object is stored.

Like sodium hydrogen carbonate, carbonate in its original state is a substance that dissolves in water. But in this case, the crystals are tightly connected to the glass, so poultices with distilled water did not give any results. Acids, even the gentlest ones, could not be used, because they would inevitably damage the gold paint, which already was in a very bad condition, and soda crystals covered it almost everywhere.

At first, we tried cleaning the surface with sharpened wooden sticks under the microscope. This was necessary in order to understand whether the gold remains would be removed together with the crystals. This was not the case, so we decided to carry on. But in some places where the gold was covered with a thicker crust which could not be removed without damaging the gold, samples were taken to soften the crust with weak citric acid; this reaction was enough to remove the remains of the crystals without damaging the gold.

After the cleaning had been completed, the question of the protective coating of the glass was raised. After all, as mentioned above, the process of glass disease is irreversible, and if you look at the surface under a microscope, in those places where the crust was removed, you can see that the glass has become rough. But, based on the conservators' experience, no protective coating used in conservation today is not perfect and sooner or later it will still need to be removed, which means that once again the object will be exposed to danger. Therefore, it was decided to leave the glass without a protective coating, and to preserve it to create the necessary temperature and humidity conditions.