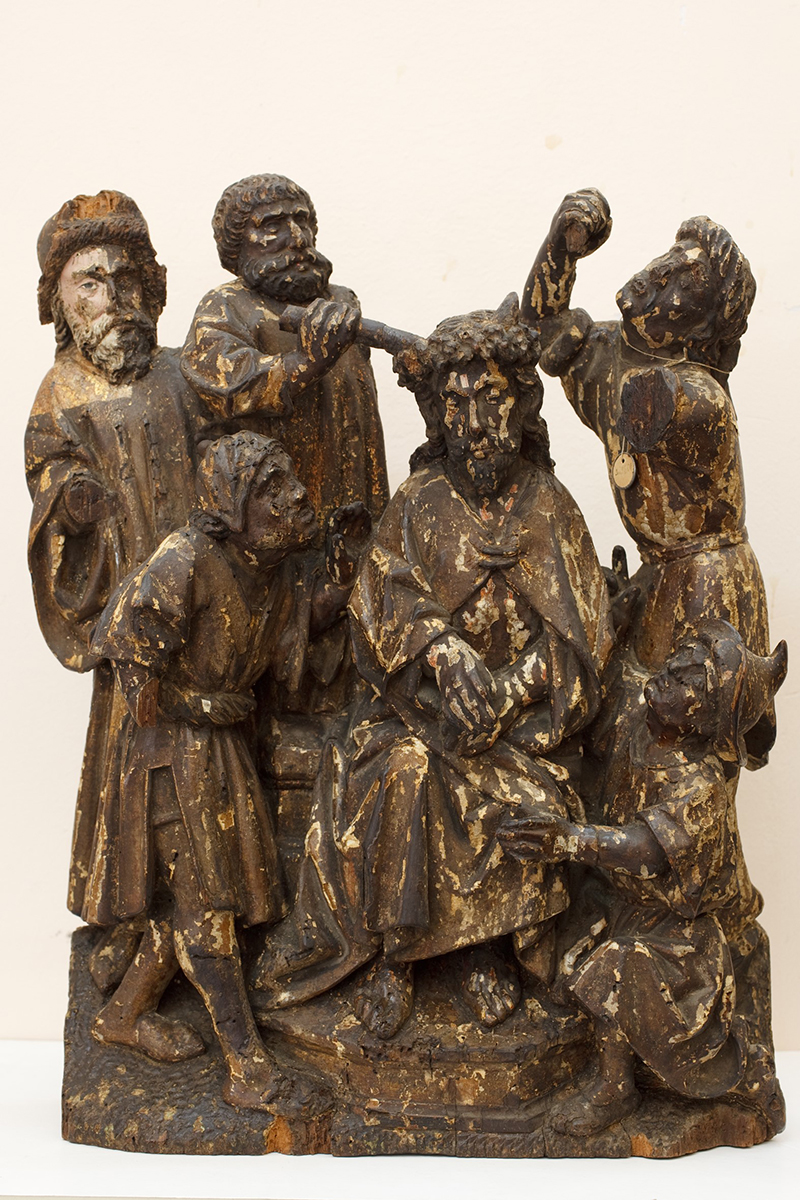 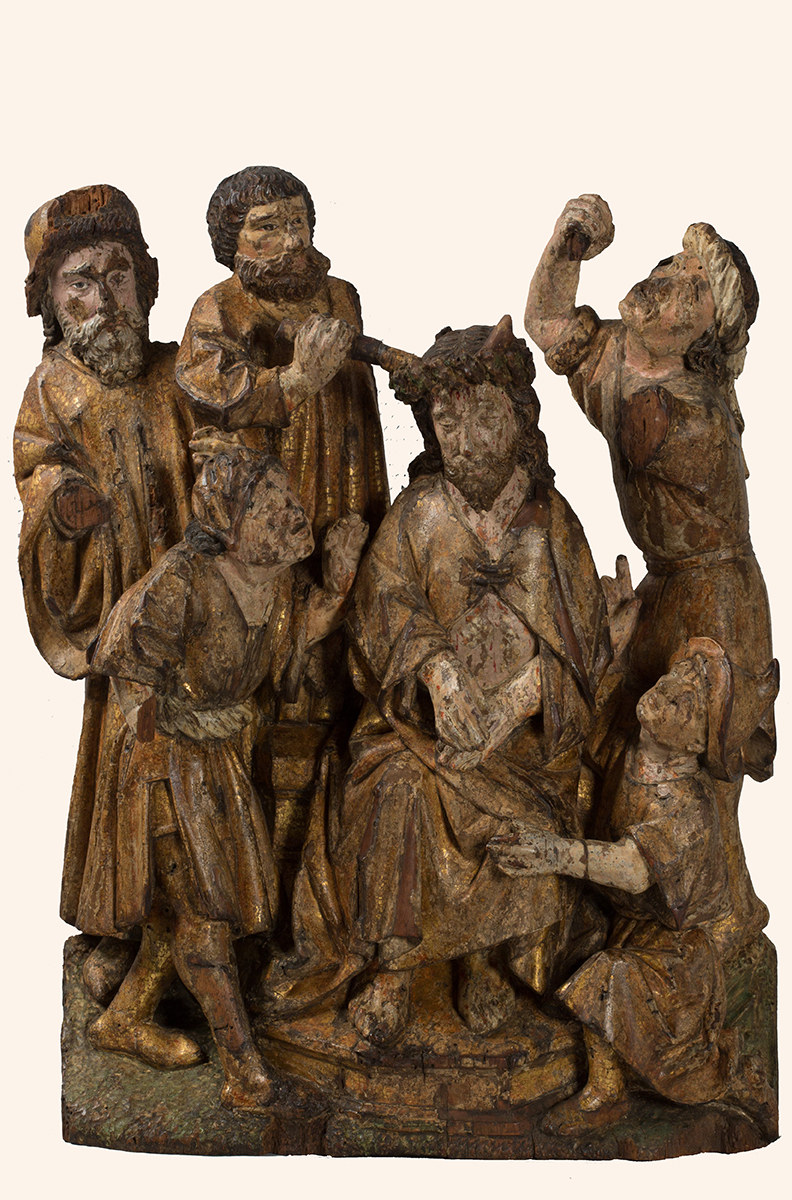 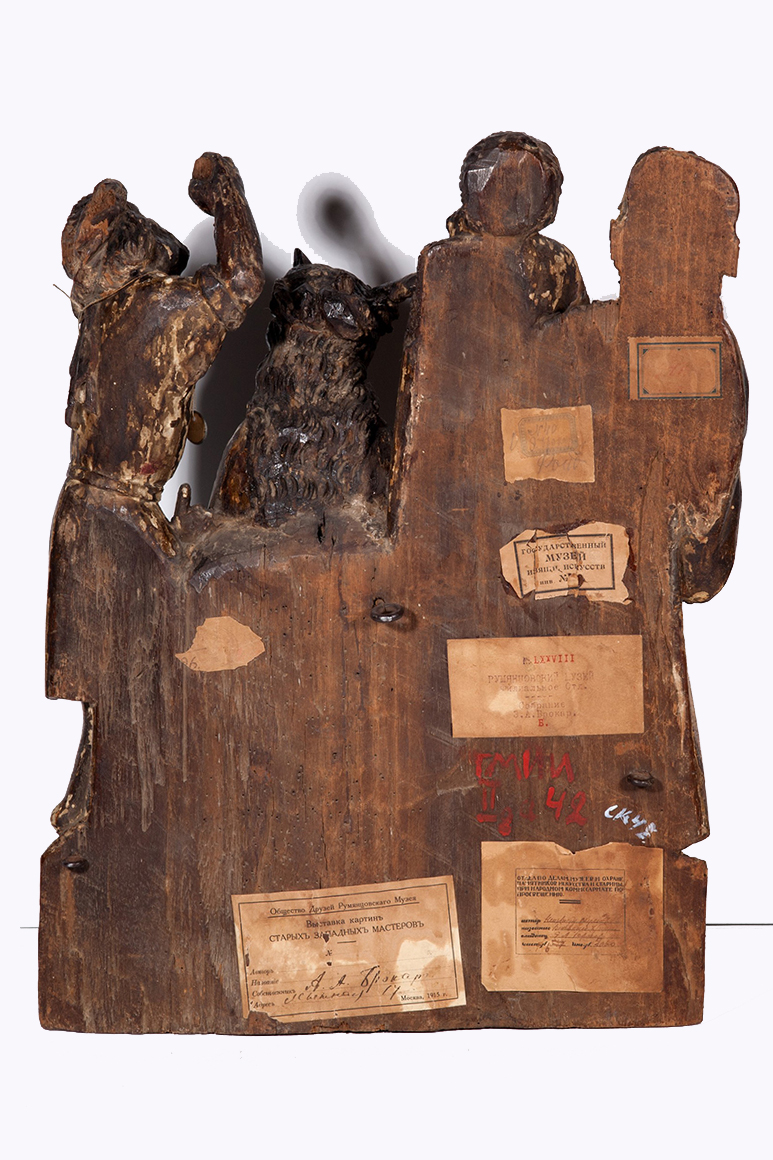 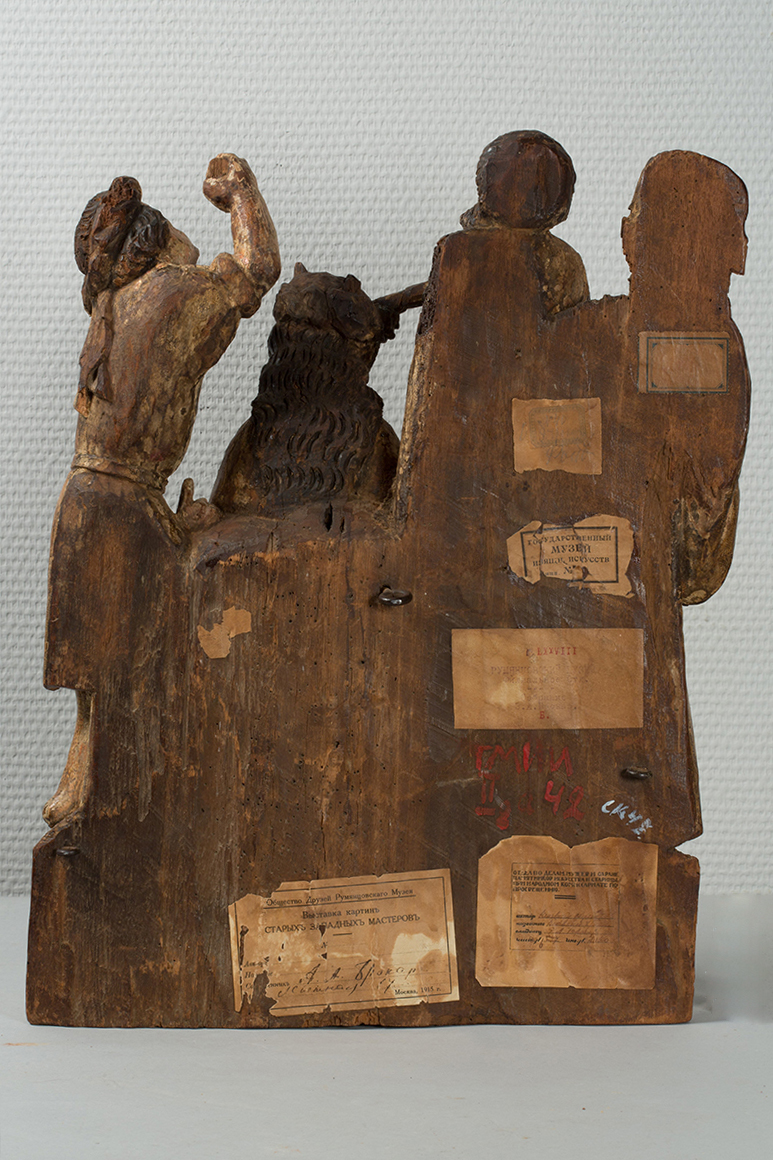 Back before and after conservation

The sculpture, depicting a scene from the Passion of Christ cycle, is made of a solid piece of hazel-wood as a painted and gilded carved high relief. In the course of its life, parts of hands and attributes of the standing figures were lost. As a result of fragmentary damage to the base by a grinding beetle, minor details of the carved decoration (the base, curls, headdresses) were lost. Surface dirt and overpaintings obscured the brightness of the paints and gold, distorting the original appearance of the relief. In the areas where the overpaintings were lost, traces of the underlying paint layer were visible, indicating its earlier origin (probably, it was the original paint layer). Samples of layers taken with a micro-needle under a microscope and chemical analysis confirmed the presence of several layers of overpaintings.

The conservation process included consolidation of the ground and paint layer, strengthening of the wood, removal of the darkened coating off the gilding and uncovering of the original paint layer. After consolidating the ground and the paint layers, the original paintings were uncovered under a stereomicroscope in a mostly dry technique. Some areas were opened with specially selected solvents. After the uncovering of the faces, and exposed hands and feet of the figures, amazingly fine paintings of the eyes, pupils, blood drops and even a fine drawing of moustaches and beards were revealed; the original colour of the crown of thorns and base at the foot (green) was revealed, as well as the gilding.

Upon completion of the treatments, the object was coated with a protective composition and handed over for storing. 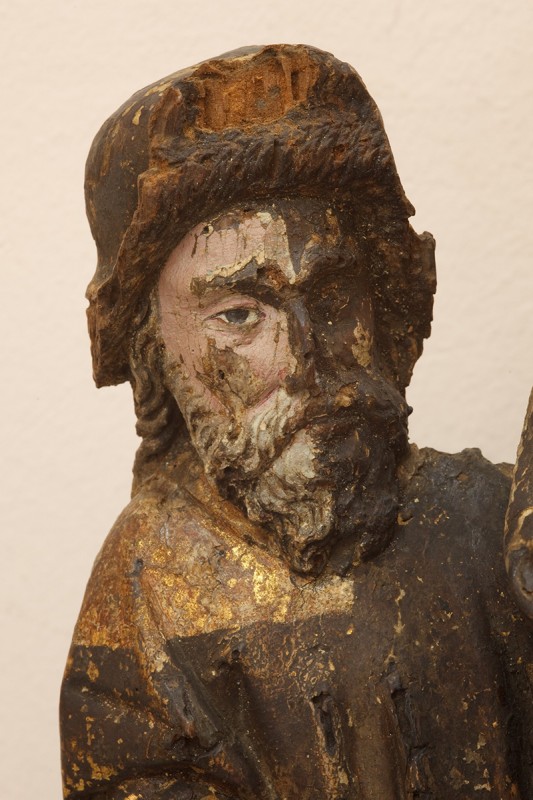 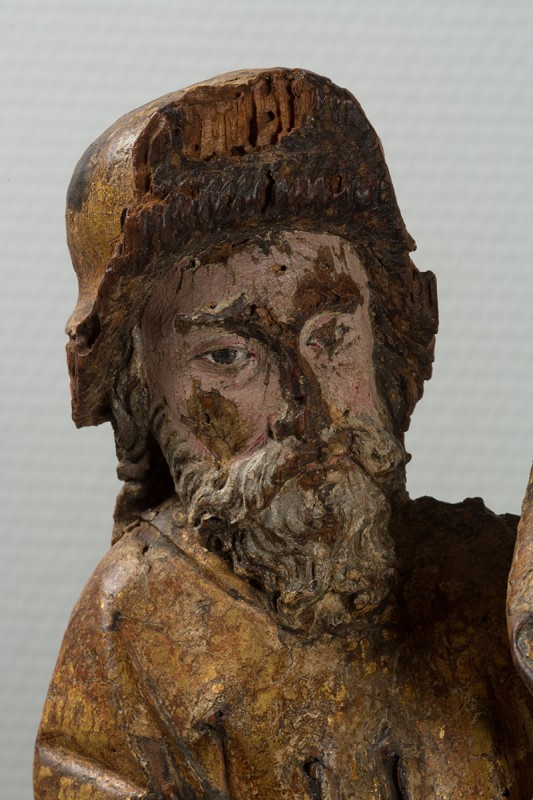 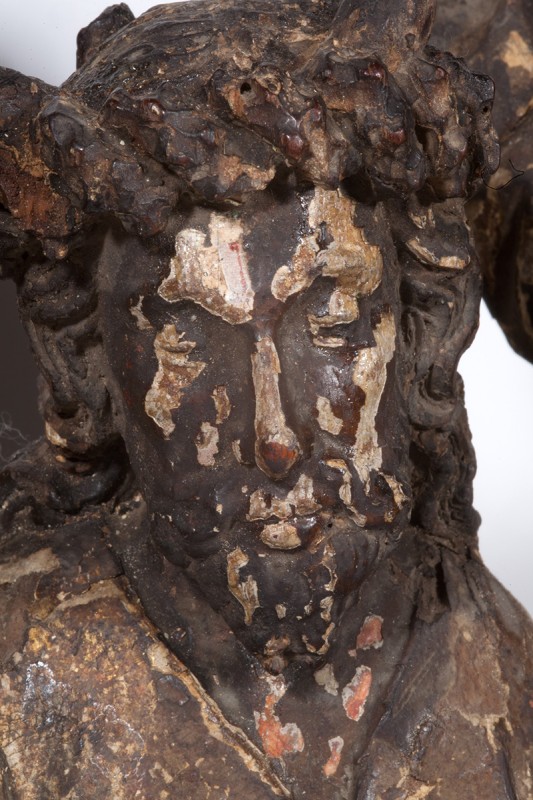 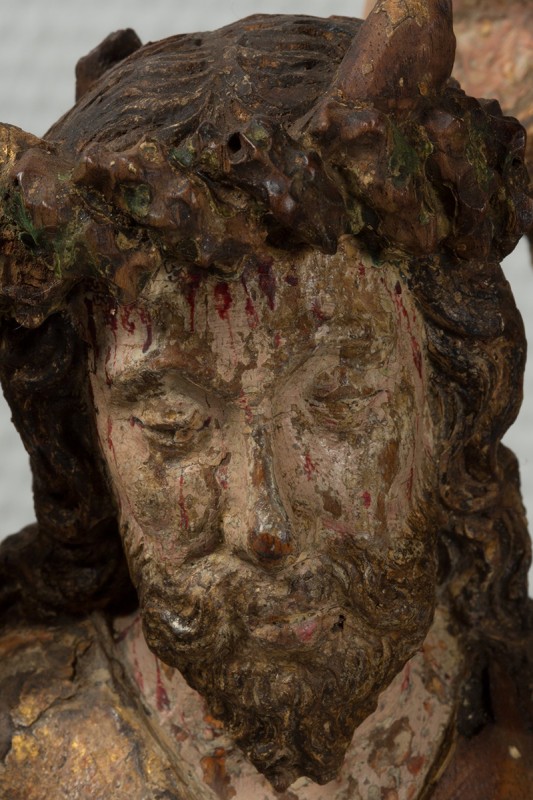 Face of Christ after cleaning 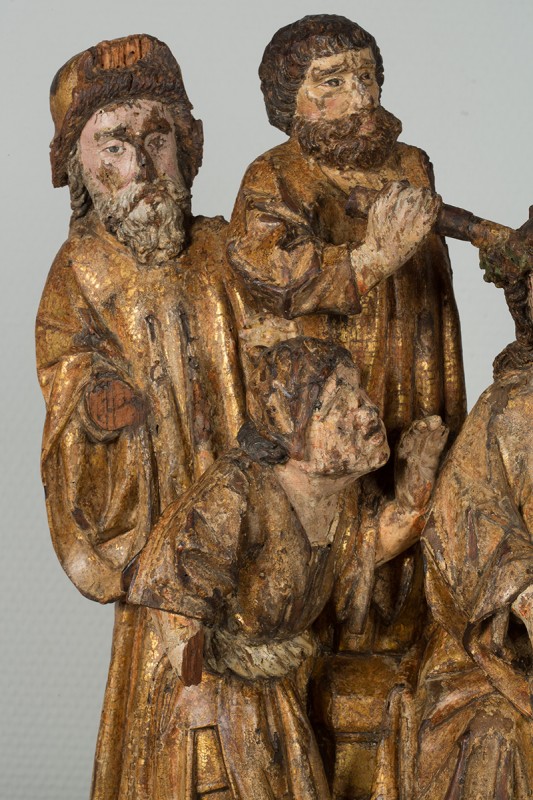