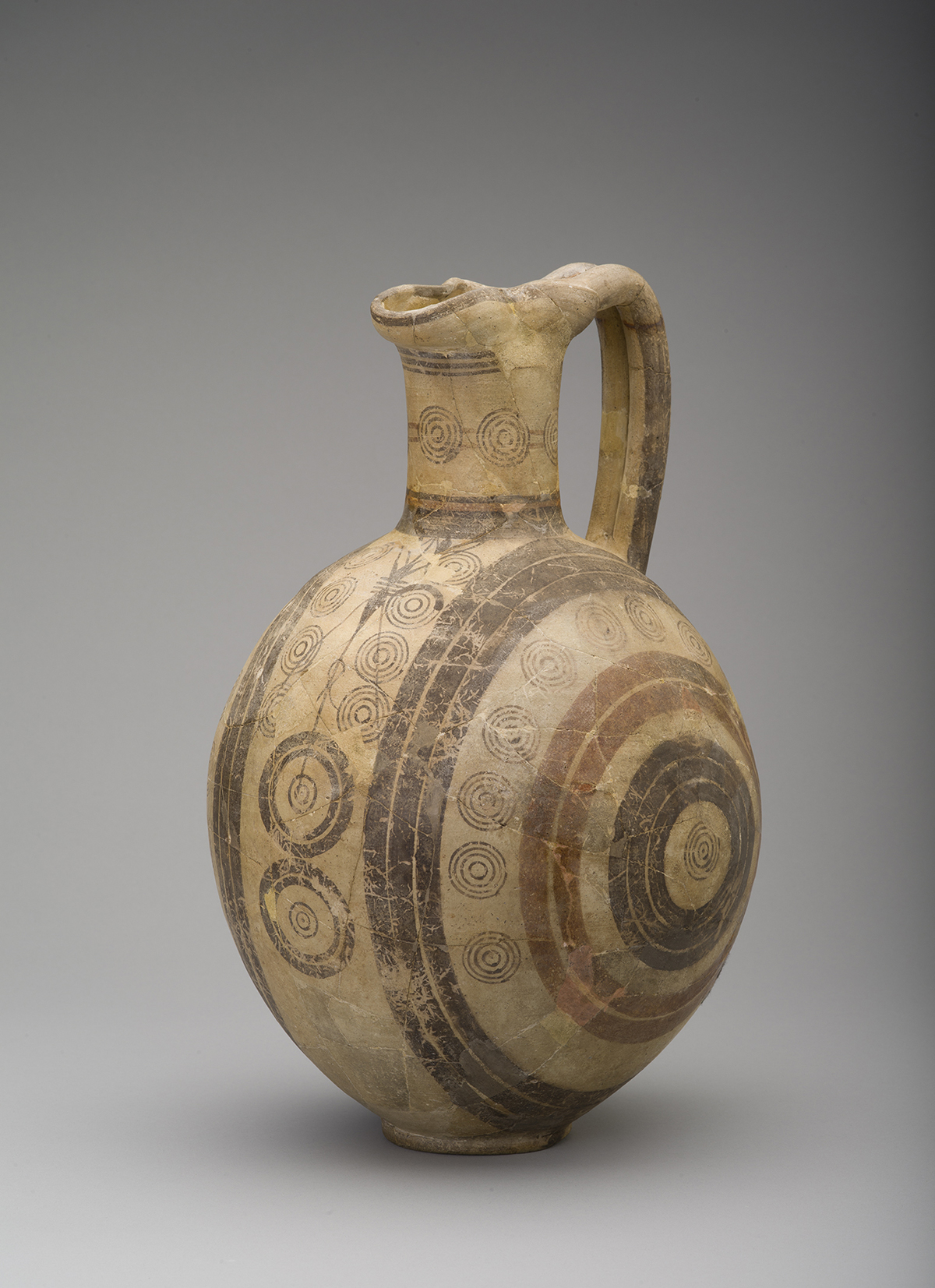 A large oenochoe from the end of the 8th - the beginning of the 7th century BC belongs to the early period of the Archaic era and represents a type of vessel widely spread at that time in Cyprus, with a spherical body placed on a round base, with a cylindrical neck, a three-lobed whisk and a double-barreled handle. The four-sided decor of this type of vases is built on the same general principle: the sides are decorated with a concentric pattern of red and black-brown rings that are located around the central concentric circle. It is not uncommon for rows of concentric circles similar to the ones on the main sides to fill the spaces between the rings. There are several similar vessels in the collection of the museum; this oenochoe is the largest of them. It stands out not only in size, but also in the decor. Along with the usual pattern of concentric circles, there is also a vegetative motif, which, perhaps, serves as a depiction of the "world tree". Plant motifs in the decor of Cypriot vases was an important innovation, which only became widespread in the Archaic times. But it is significant that the vegetative pattern on this oenochoe is based on vertical lines intersected with a slightly slanted cross, which was a traditional ornament often found on the front and back sides of vases with four-sided décor back in the Geometric period.

The large oenochoe from our collection belongs to the collection of items that were destroyed in May 1945 in the explosion of an air defence bunker, where many items from the collections of Berlin museums were stored. Until 2011, its fragments were among other fragments of pottery from the collection of Transferred art, heavily damaged by fire; their attribution was extremely difficult. But as a result of meticulous work that took several months it was possible to distinguish 126 fragments, the preliminary repair of which was the first stage in the conservation of the vessel.

Approximately one fifth of its surface was heavily covered in soot, up to the point when it was impossible to distinguish the pattern, and one seventh of it remains lost. It turned out there were losses on each of the four sides of the oenochoe and they were scattered all over its surface: in the lower and upper parts of its body, as well as on the neck, rim and handle. After the preliminary repair and the subsequent disassembly, the fragments were subjected to thermal cleaning (i.e., baking in an oven at a temperature of 450-600 ° C, the temperature is set depending on the nature of the soot contamination of a particular fragment). Then, the cleaned fragments were again repaired with an adhesive based on the acrylic copolymer (BMK-5) diluted in isopropyl alcohol. The losses were filled with tinted plaster.

Since the irregular outlines of the losses distorted the visual integrity of the vase, it was decided to do partial retouches, "closing" the widest and largest concentric rings that adorn its sides. The initial geometric regularity of the concentric bands decorating the sides of the oenochoe excluded the possibility of the serious distortion of its appearance, and at the same time, made it possible to give the vase a more harmonious look. In this case, restoration of the smaller details of the pattern was omitted. The final stage of the conservation treatments was the filling of the seams between the fragments, which was done with a tinted paste based on the solution of an acrylic copolymer BMK-5 in isopropyl alcohol.