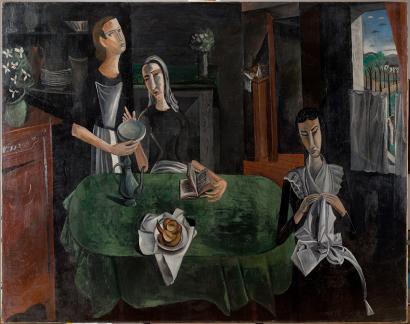 André Derain’s Saturday is one of the most famous postimpressionists’ paintings that belong to the museum. The painting takes a special place in Derain’s art as well. Guillaume Apollinaire admired the painting and considered it one of the best in Derain's work, and printed its image in his magazine Soirees de Paris in 1914. [1] It is believed that the artist started working in the painting in 1908 and had finished it by 1913. It is known, that Schukin bought it for his collection in 1913 from the artist himself, but it was delivered to Moscow only in 1914. Apollinaire also noted the religious motif of the painting: the three women gathered around the table refer to The Three Marys who came to Christ’s tomb in the morning after his resurrection. The beginning of the 10th century was the time of a great interest of avant-garde artists in Christian themes, medieval and renaissance sculptures and paintings, which they tried to reinvent with their new creative tools, and tell them in a language of a ‘renovated’ art.

In the painting we can see reminiscences of both the Avignon Pieta by Enguerrand Quarton from the mid-15th century, and of the images of late Gothic sculptural primitives (in the way the characters themselves are interpreted). [2] It is known that the artist spent a long time working on the composition, finishing it only in 1913, which, in 1925, Andre Salmon confirmed in an article about Derain: “…the famous Saturday, a masterpiece on which ever-inventive Derain had toiled without a thought of fame or recognition, and about which he said something worthy of the best quotes of Picasso: ‘I have redone the painting anew; the meal has eaten the people.’” This phrase of the artist became especially significant after we had the results of the studies in 2017, before its exhibition in Centre Georges Pompidou in Paris. [3]

Some strange whitish spots in the bottom part of the painting were visible to a naked eye, the same was true for the thicker brushstrokes which didn’t correlate with the actual image. An x-ray confirmed radical alterations in the original composition. Under the upper paint layers there is an upside-down image of the original painting, which confirms André Salmon’s testament: at some point while working on the painting Derain turned the canvas upside down and painted a new image that we see now on top of the old one. The arrangement and the size of the female figures are different in the two versions.

The subjacent composition (just like the one we see) consists of three figures placed in a room around an oval or round cloth-cladded table. The composition is centric: a woman with her head covered with a light cloth is placed directly in the centre. This image is close to the way Virgin Mary would be depicted in the 15-beginning of 16 century in Italy in paintings of a so-called Sacra convesazione type. In the foreground, just like in the final version, there was an oval table covered with a tablecloth and with many different objects on top. It seems that the artist had painted and re-painted the still-life many times, as it is difficult to distinguish from the x-rays what exactly was depicted on the table. Judging by one fragment of this area on the x-ray it could be a still-life with fowl and cookware. The background of the original painting had a symmetrical composition with a console table or a fireplace behind the central female figure. To the left of her something like a vase is visible. The faces were stylized; however, the volume was modelled with several layers of white paints, which is visible in the x-ray images. The background had to be quite light, as it looks to be heavily whitewashed in the x-ray.

The IR-images were inconclusive. The artist used a lot of black pigment which absorbs infrared light, so it prevented to see even the outlines of the subjacent image.

Physical and chemical studies of the pigments and fillers

To study the pigment compounds of the paint layer we took samples, which were then sealed in epoxy, which was later ground and polished. From that point on, the micro-samples were studied under optical and electron microscopes. This allowed us to distinguish which pigments were related to the original image and which to the visible one. The nature of the samples with their clear layered structure shows that Derain put the next layer of paint on a dried previous layer, and not alla prima (wet-on-wet), how it was often done amongst postimpressionists. The subjacent painting had more colours, with dominating blueish-green, blue, and reddish-brown hues. The tablecloth was not green, but brown. The woman on the left of the central figure was dressed in a blue dress and a bright red blouse or shawl. For the skin, the artist at first used the classical technique mixing white, red organic pigment, and ochre to make shades of nude. In the final version, the bare areas of bodies were painted more liberally with light and dark ochre. The layered structure of the samples tells us that the artist worked hard on the painting, constantly perfecting certain areas, and looking for harmony in the combination of shades of the same colour, often using complex mixtures of oil paints.

We found several pigments and fillers while studying the paint layer samples. A mixture of chalk and white lead with glue- or emulsion-based binder was used for prepping the canvas. Priming of such composition was indicative of factory-prepped canvas. The beginning of the 20th-century French artists prepped their own canvas very rarely, preferring to buy ready-for-work canvas from art supplies vendors. Many samples contained baryte, which was often added to paints during manufacturing to save pigments. White led and zinc, were found as well. In the lower paint layer, the artist used pure zinc white for faces as one example, and in other areas he used it together with white led, which leads us to the conclusion that Derain used both in his work, and used them quite freely.

For yellow, the artist exclusively used yellow ochre, even though in the beginning of the 20th century there were plenty of bright yellow pigments available on the market, such as chrome yellow, cadmium yellow, strontium yellow, and Naples yellow, which most of Derain’s contemporaries preferred. Comparing to all those, ochre has a more muted colour, and, perhaps, was chosen for this reason. For browns the artist used umber, adding it to other paints to get light brown and cream shades. Umber is indicated by characteristic peaks of manganese (Mn) on an x-ray spectre, which distinguishes it from other types of iron-rich brown pigments.

Out of red pigments in the painting’s colour palette, we found red ochre, red lead, and red organic pigment. Red lead, with its beautiful reddish-orange shade, was used quite rarely by the artists in the first quarter of the 20th century; they usually preferred cinnabar, and, after the 1920s, cadmium orange and red. For many paint layers, the artist used red organic pigment, always mixing it with other paints. Studying the sample showed that the lake red pigment in Derain’s painting was precipitated on gypsum, which is concluded from the characteristic peaks of calcium and sulphur (Ca, S).

Berlin blue and finely dispersed blue organic indigo pigment were found in the paint layers of the original painting. Berlin blue with its intense blue colour was used to paint the clothing of the characters. Small dark blue particles of the pigment are clearly visible in the samples. For the landscape background in the bottom layers, Derain used blue organic pigment which was most likely indigo. Berlin blue and cobalt blue were found in the upper paint layer. The latter was used to paint the landscape background on the right.

Two green pigments: glauconite and chromium oxide, were found in the paint layers. Glauconite looks like quite large dark-green particles in the samples. On the x-ray, it is distinguished by characteristic peaks of iron, magnesium, aluminium, and potassium (Fe, Mg, Al, K). Both pigments are present in lower and upper paint layers alike.  It is worthy of note that the artist used both paints to make the velvet green tablecloth, perhaps, in search for more intricate combinations of shades of green.

Studying the paint layers samples showed a significant difference in the colour palettes of the original and the final versions of André Derain’s painting. In the subjacent painting, he used light greyish-blue shades, and overall a more developed and complex colour palette, in comparison to the final version.

[4] Electron microprobe Jeol Superprobe 733 equipped with an energy dispersive spectrometer Oxford INCA. The samples were prepared and studied at the Fersman Mineralogical museum laboratory by A. Agahanov and A. Vasilyeva

[5] The adhesives were not analysed.

[7] Baryte or blanc fixe (barium white). Synthetic barium sulphate (BaSO4) was discovered by Kuhlman in 1830s. Since the 1830s, it is often found in priming of paintings, both in pure form and combined with white lead and chalk. See Косолапов А.И. Естественнонаучные методы в экспертизе произведений искусства. С.-Пб. 2010. С. 159.

[10] Red organic pigments were tinctures or extracts of plants precipitated on a mineral base: chalk, gypsum, marble powder or baryte. To figure out the type of the pigment, a liquid chromatography method is used. I was not analysed in this case. For more detailed information see Kirby, J., Spring, M., Higgitt, C. 'The Technology of Red Lake Pigment Manufacture: Study of the Dyestuff Substrate'. National Gallery Technical Bulletin Vol 26, 2005. P. 71–87

[12] The types of organic pigments were not analysed. Indigo belongs to an ancient group of paint pigments. An artificial analogue of the organic pigment made from indigofera and dyer's woad was synthesised in 1900.