Niccolò di Pietro, Madonna with angels and a donor. Lamentation 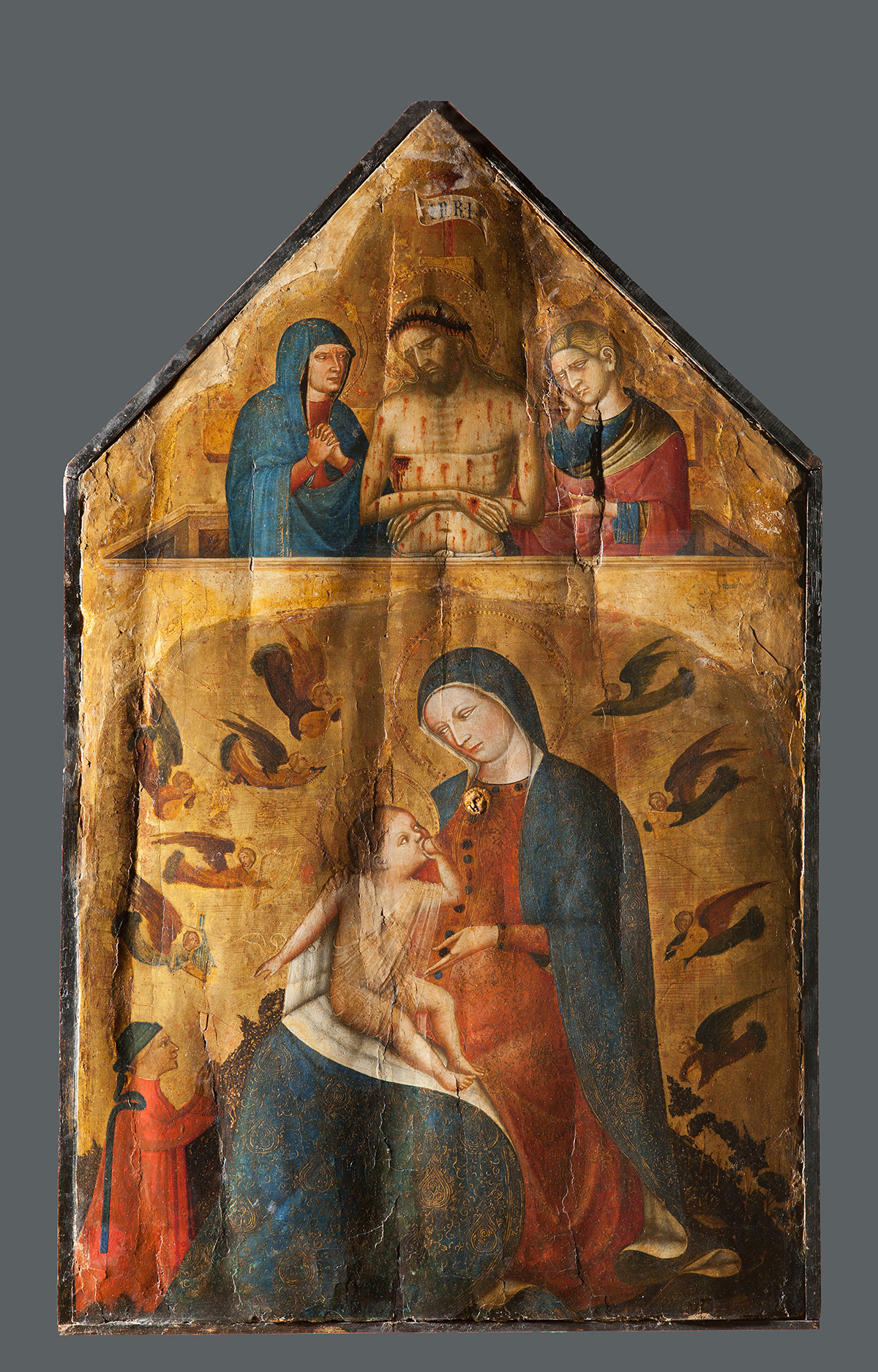 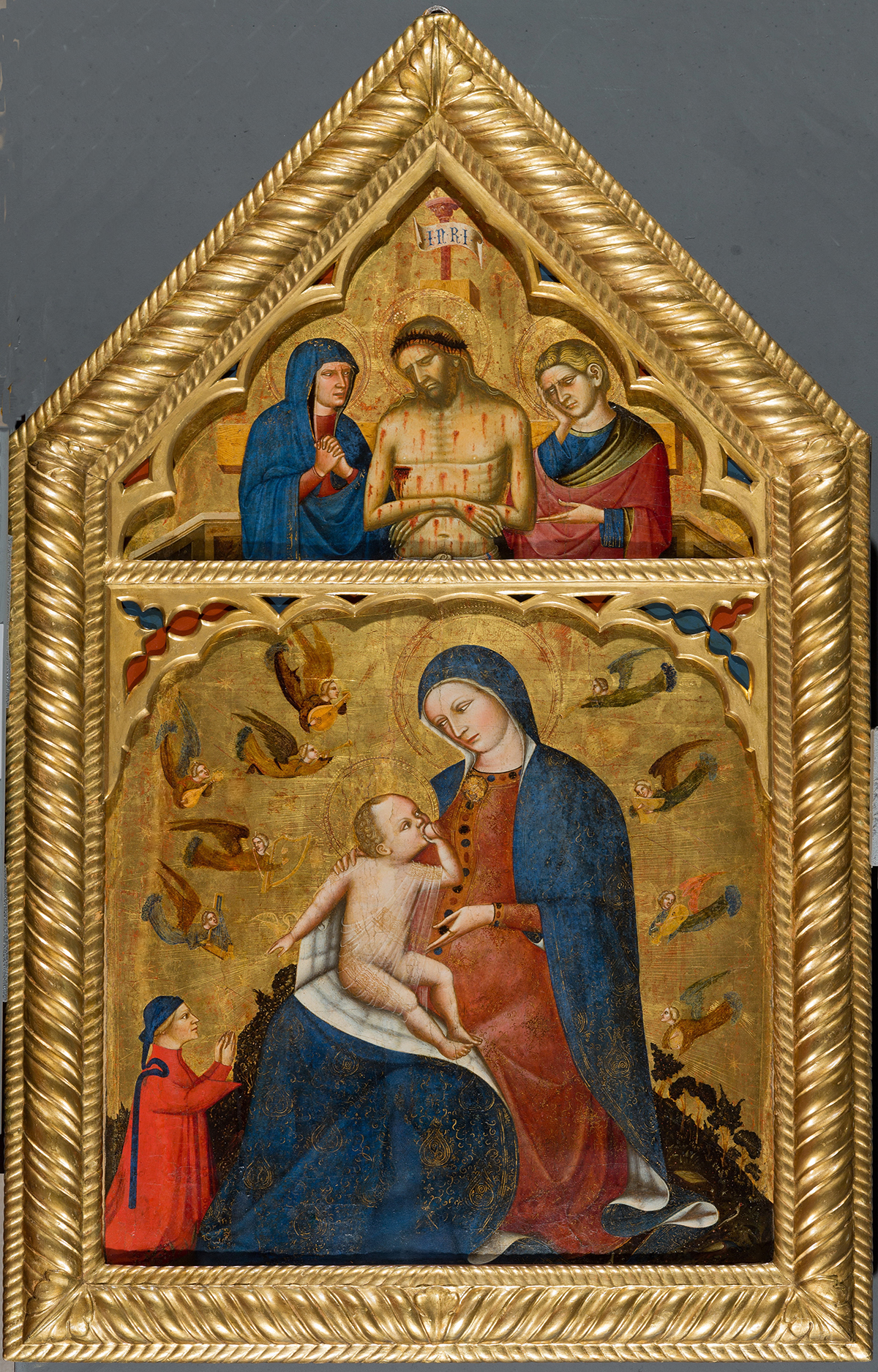 Upon arriving to the restoration workshop the piece was in a highly unstable condition. The original painting was covered in many layers of darkened varnish, restoration fillings and inpaints, that greatly distorted the original colour. However, that main problem that had to be dealt with was the grave condition of the original wooden base. Etched by woodworm poplar board was mercilessly thinned during the unprofessional 19th century restoration and attached to a coarse underframe, which subsequently caused deformation and rupture of timber. The unstable condition of the board inevitably lead to more and more destructions of the paint layer; preventive measures and multiple conservation measures did not bring the desired results; the painting was in need of a comprehensive long-term conservation.

Before the conservation works started, all the necessary physical, chemical, technical and technological examinations were performed to evaluate the condition of the piece and make a conservation plan. The decision was made to unmount the piece from the old underframe and come up with a consolidation method.

After removing of the thick filings, at times covering the original pain layers, many deformities hidden underneath were uncovered, as well as many elevations of the wooden board, appeared after previous restorations. The extent of the destruction of the wood after the dismantling of the subframe was enormous.

In the process of conservation the specialists managed to stabilize the condition of the wooden base, the wood was consolidated; the deformations of the board caused by previous conservations were fixed.

Upon finishing the conservation works with the base, the fillings were made at the places of ground layer losses. The paint layer was covered with a layer of varnish, after which the necessary retouches were also made.

The final decision concerning consolidation of the painting after stabilizing it was made after long discussions and consultations with the local and foreign professionals. The art conservator who worked on the painting took part in the educational program on conserving wooden panels within the Panel Painting Initiative program organized by Getti museum in Dresden in 2013. These classes provided valuable and timely information on methods of panel conservation used in European and American museums; they also gave the opportunity to find out about similar experiences of our foreign colleagues in this very specific professional area, as well as to see the panel paintings being restored at the workshop of Dresden National Gallery. Valuable opinions and recommendations on our piece were given by leading European and American specialists on wooden panel conservation. As all the participants of the discussion agreed, this painting's condition was a highly difficult case that needed especially careful approach. All the information gathered at the seminar was thoroughly analyzed, all the risks connected to different methods were taken into consideration, and only after that the final project on fixating the painting was made. The technical part of the work was carried out in close cooperation with our British colleagues, who proposed a fairly simple and safe flexible support system, developed in England and widely used in European museums.

After the restoration works were completed the painting was placed in a frame and held with a custom light support system consisting of rods of varying thickness that keep the panel in a relatively leveled position without creating excessive tension in the wood structure. The piece is isolated from short-term changes in temperature and humidity with museum glass (plexi) on the front side and a polycarbonate panel on the back side.