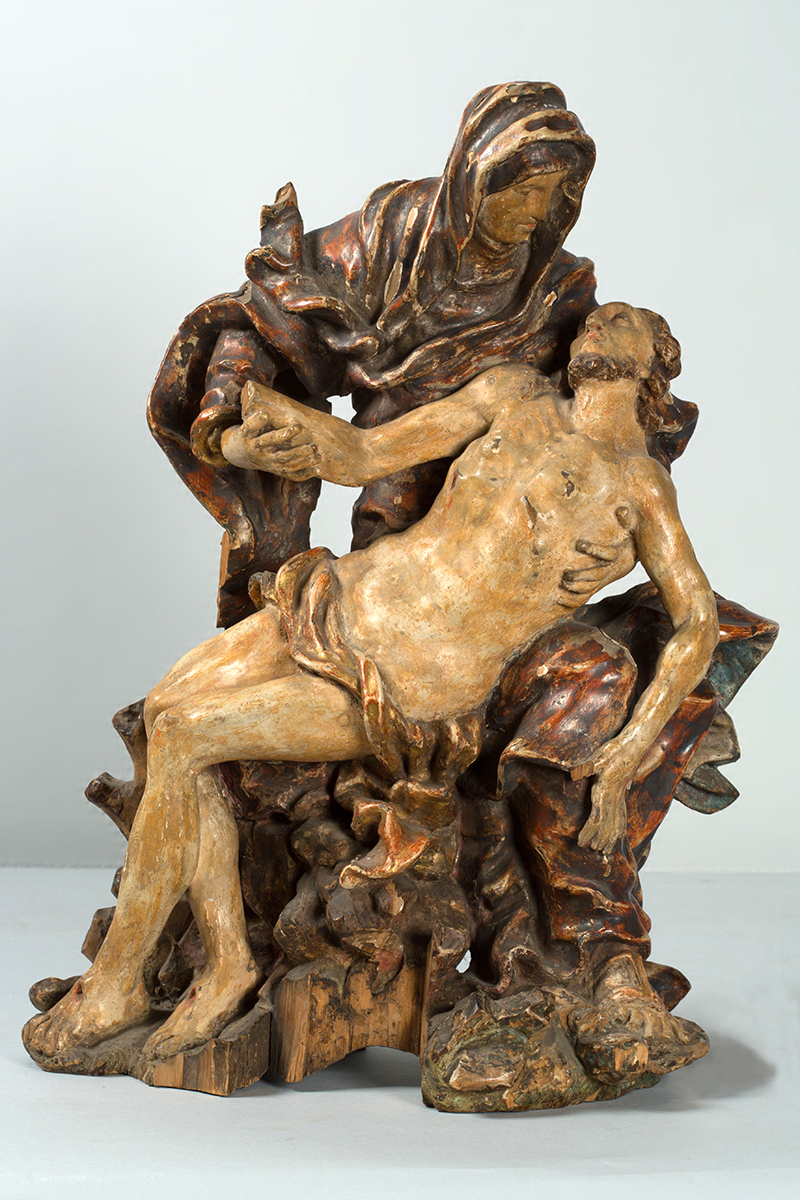 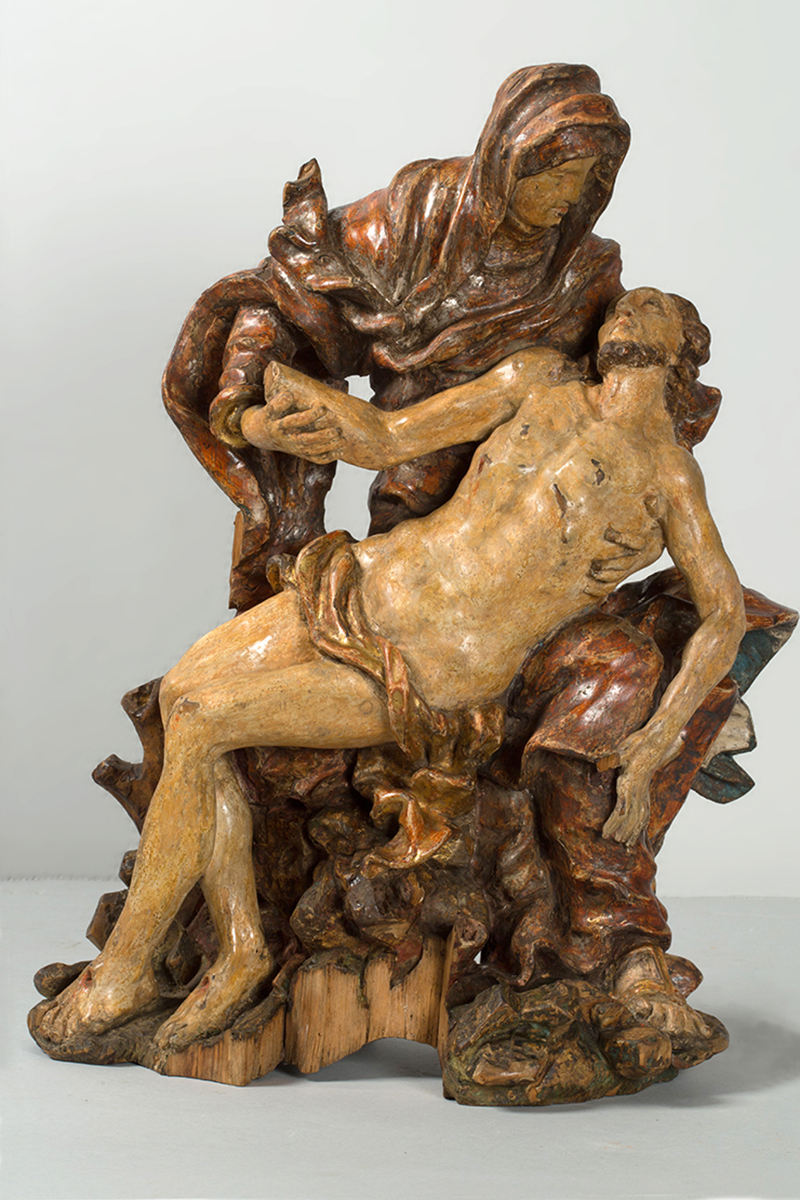 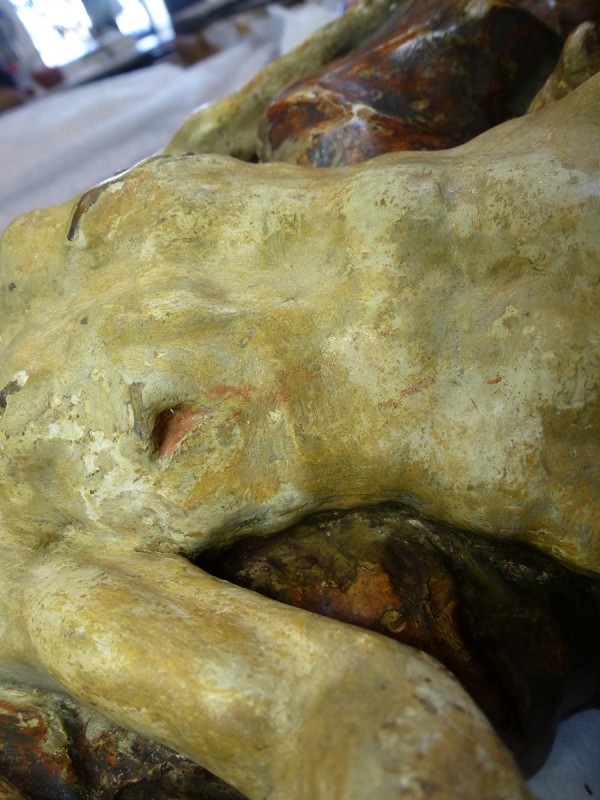 The state of the surface of Christ's carnation. Sample made to remove dirt and late overpainting 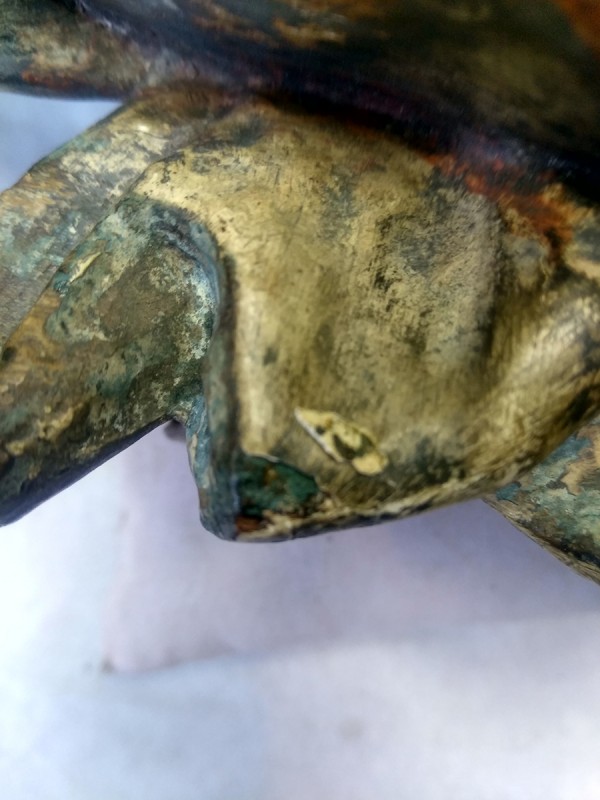 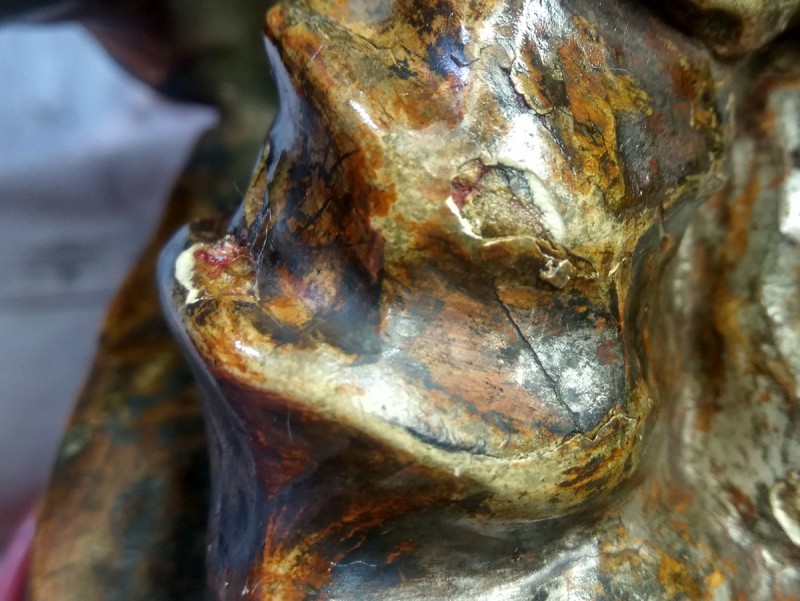 Traces of cherry paint layer in the losses of Mary's omophorion. Cleaning of the silver 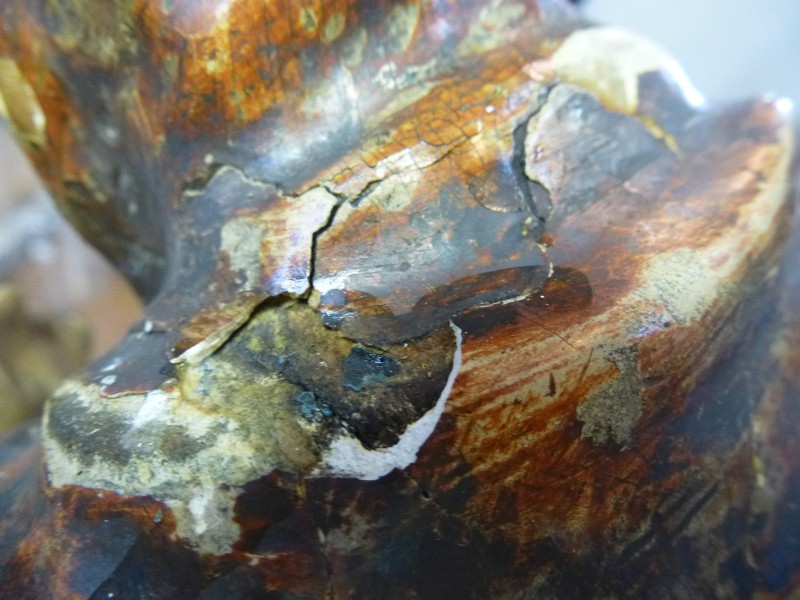 State of the surface before consolidation. Peeling of the polyment 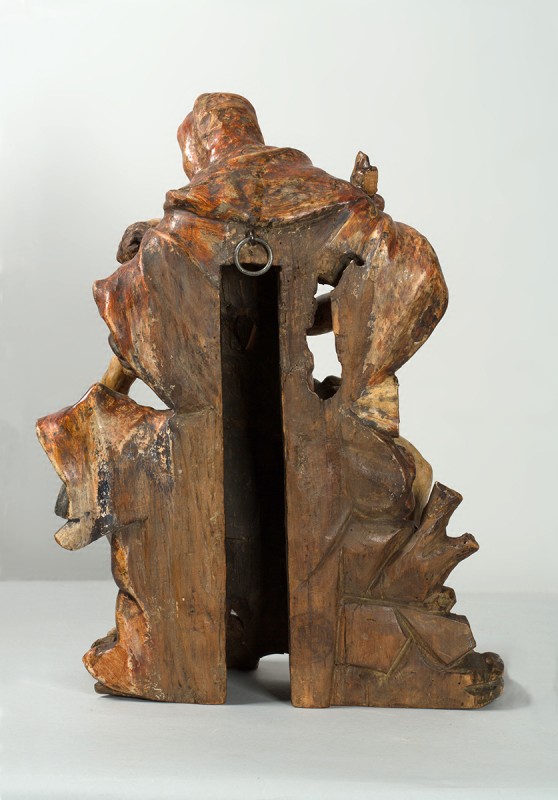 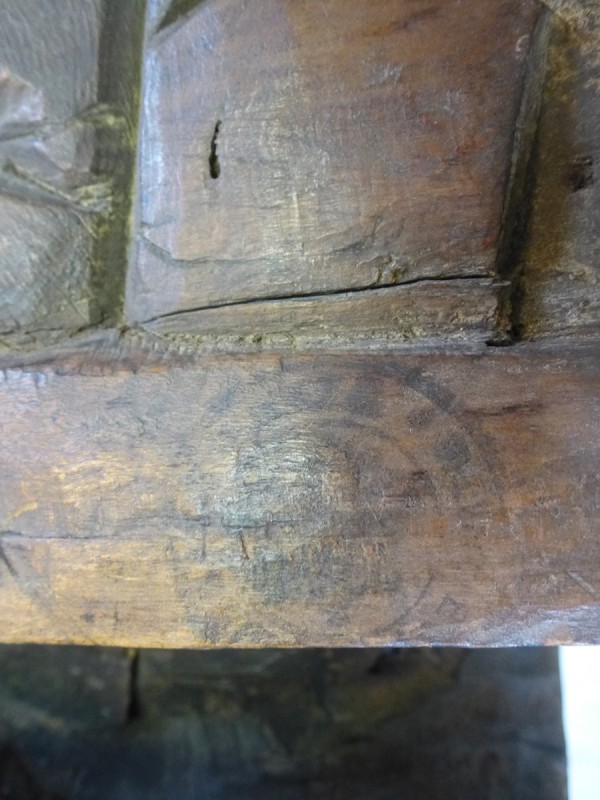 Traces of the stamp at the back 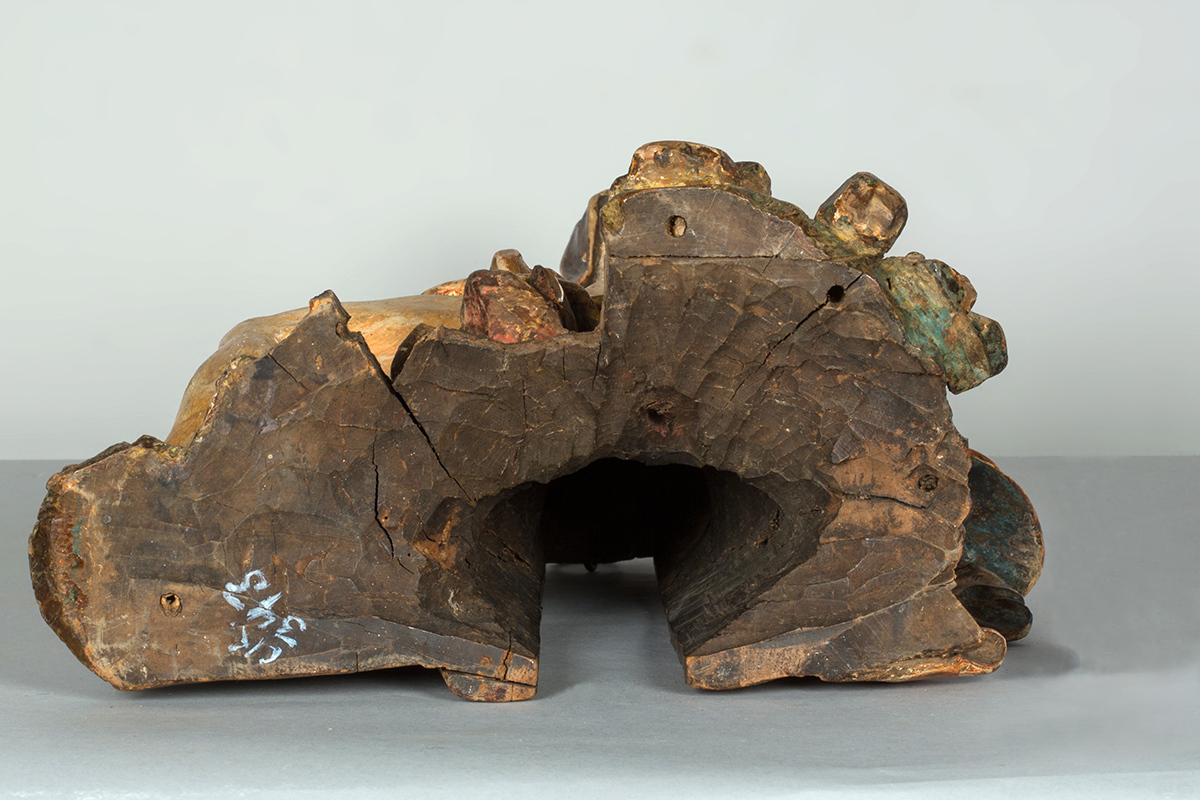 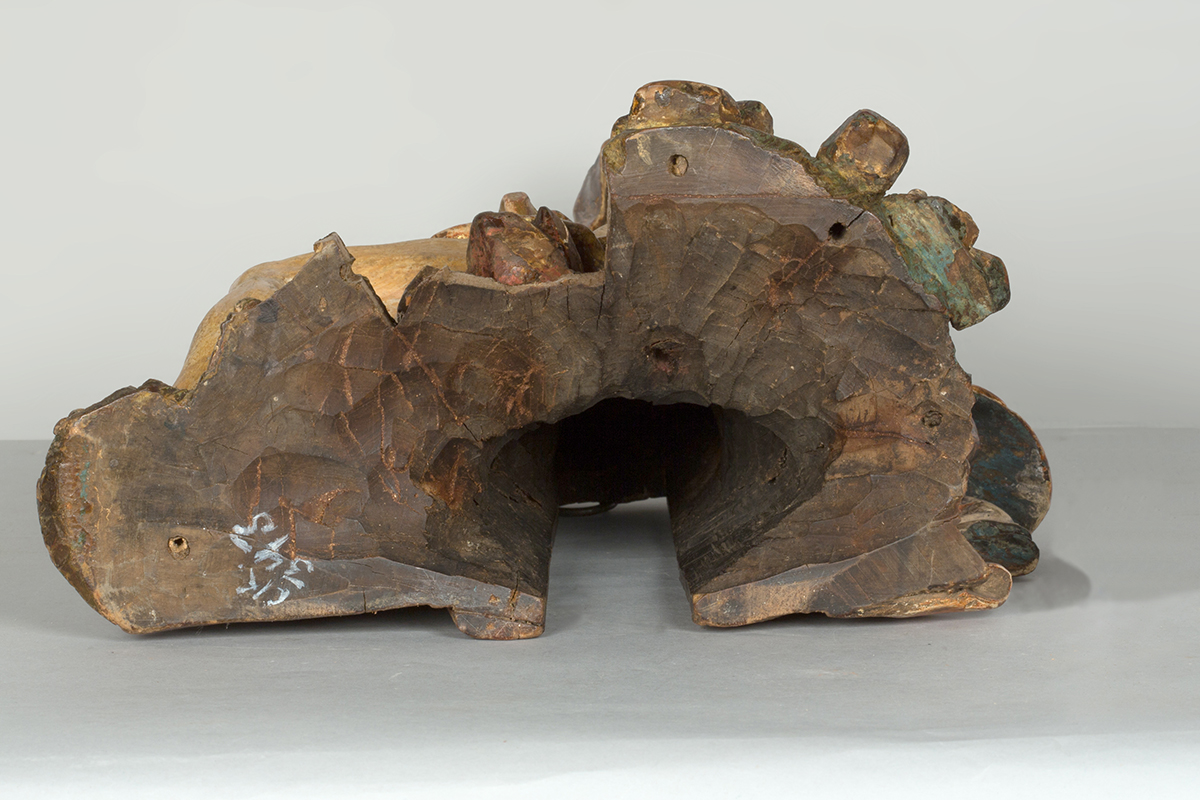 Base before and after conservation

While working on wooden polychrome sculpture there are several tasks to be solved at once. In other words, restoration and conservation processes are carried out both on the wooden carved base and on the decorative coating of the sculpture, which is not always limited to a paint layer. By decorative coating, we generally understand a complex of layers applied to the wooden carved base of the sculpture. In this case, it is a primer, paint, polyment, gilding, and silvering. First, it is necessary to consolidate the detached fragments of the decorative layer in order to prevent powdering and losses.
Removal of dust and black layers on the surface of Mary's omophorion revealed preserved fragments of silver and an ochre layer of polyment.
The work on the carnification of Christ was particularly difficult. The surface of Christ's body was badly damaged by time and restorative interventions. As a result of losses, scuffs and darkened overpainting, the surface of the paint layer became spotty, which affected the overall perception of the sculptural image. It was necessary to tonally even out the paint layer without particularly deep intrusions. Dirt, yellowed overpainting, and dark spots were removed, and then the surface of Christ's carnation was "put together" by tinting.
Studying the surface of the sculpture under a microscope in the process of conservation allowed to find out new facts of the history of Pieta. In the areas of ground and polyment losses, the remains of the former paint layer can be traced, which shows that Mary's omophorion was cherry-red, and the lining was blue. In other words, the sculpture used to be polychrome. Later Maria's omophorion was re-prepped and covered with silver on ochre polyment. The carnation (the uncovered body parts) of Mary and Christ was also redesigned, the existing paint layer is a later addition. The previous one can be seen from a fragment of the underlying paint layer of pink on Mary's hand. From the previous decor, there are areas with gilding: Christ's ribbon, sandal and Mary's collar edge. This is the way the sculpture existed in time. Only the sculptural form, a carved wooden base, has remained unchanged from the author. The decorative design of the surface is the most fragile, the most vulnerable part of such sculptures, which rarely comes to us intact.
We have treated the wooden base: dirt has been removed, loose parts of the wood have been consolidated, splinters and movable or fallen fragments have been glued, cracks have been masticated.
On the back of the sculpture, we found partially wiped out traces of a round stamp. An infrared image was taken, but unfortunately, it did not add clarity.