Masterpieces of Edo Paintings and Prints 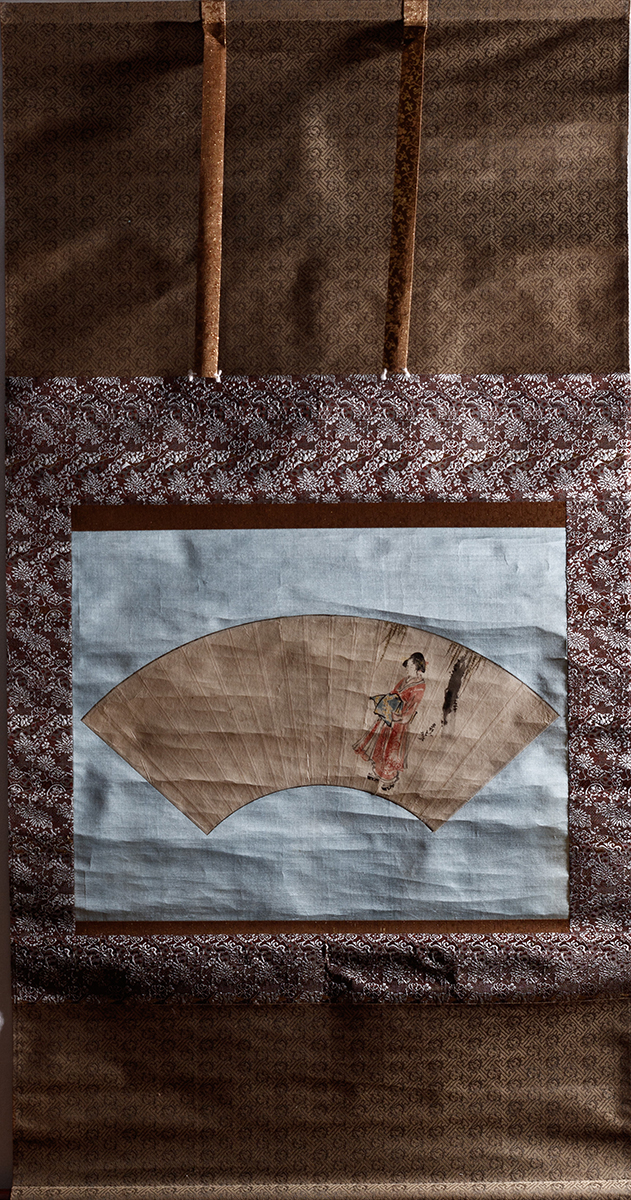 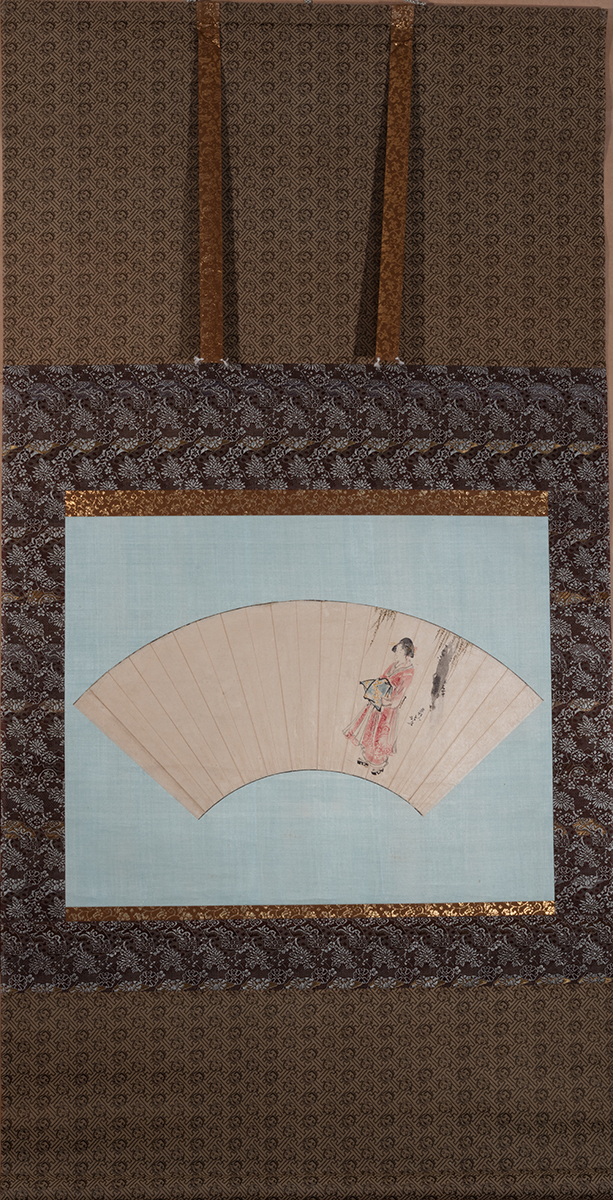 Oiran by the willow tree

The opening of the exhibition Masterpieces of Edo Paintings and Prints at the Pushkin State Museum of Fine Arts together with the Tokyo National Museum and the State Museum of Oriental Art (Moscow) was one of the key events of the Russian-Japanese Bilateral Year. The exhibition included paintings and drawings from the Japanese collection of the Pushkin Museum Prints cabinet, based mainly on the collection of Sergei Kitaev, who brought it directly from Japan at the end of the 19th century.

The condition of certain works required professional conservation with minimal intervention to prepare them for the exhibition. The Paper Conservation Workshop specialists turned to the oriental restoration traditions enhanced by contemporary methods.

These works (colour woodcuts, fans, and scrolls) were made using the painting on silk or paper technique with dyes made with mineral or plant-based pigments with the addition of a binder of animal origin. The specifics of working with these objects require a very gentle and careful approach. For example, while filling in the lost fragments and the areas damaged by insects, or removing dirt, it was necessary to take into account how thin and fragile the woodcuts were.

The woodcuts were cleaned of dust and washed to remove the yellowing. In some cases, they were treated locally with chemicals. For instance, the traces of black ink on Utagawa Kunisada's triptych Courtesans of Aizome, Miyabi and Ainare of the Ebiya establishment (three woodcut sheets in oban format glued together) were made less prominent with carefully selected chemicals, then the fragments of the triptych were glued together according to the original concept (1-4).

The conservators filled in the losses of the base, lined the sheets with a layer of Japanese paper to strengthen the base and dried them in the press. Then the newly filled parts, as well as the tears and scuffs of the paint layer were retouched.

While working on the scrolls A Beauty Reading a Letter by Katsushika Hokusai (5-9) and Oiran Hanaogi of Ogiya by Miyagawa Chōshun, the conservators faced the problem of paint layer's pigments volatility, which required binding. At the same time, it was necessary to straighten the deformations which occurred as a result of the scrolls having been rolled (15-16), as well as strengthen the thin silk framing where the split threads were peeling off. During their lifetime the pieces were significantly dirtied, there were many tears on the framing (17-20), holes caused by insects, losses of the base and the fragments of fuchin (weights).

The scrolls were cleaned of dust with soft brushes, backed with Japanese paper and wheat starch, the silk was strengthened. The deformations and scraps across the entire painted surface were mended. The strengthening of the paint layer was done with a solution of funori and an ultrasonic atomizer. Funori is an aqueous solution of seaweed used for traditional restoration of Japanese scrolls as a reversible adhesive and surface cleaner. After a short period of moistening, the scrolls were dried under a cloth. After pressing, the silk and paint were retouched.

Traditional Japanese scrolls kakejiku (vertical scrolls) are made with different materials: silk, cloth, Japanese washi paper for the base, wood and ivory for fuchins and upper pillars (hashira). Therefore, specialists in different fields of conservation, including some from other organizations, were involved in the work. For example, filling in the losses in the ivory knobs of the scrolls (jiku) (5, 6, 8) was carried out by the head of the Ivory Conservation Workshop of the Grabar Conservation Centre, Larisa Getman. 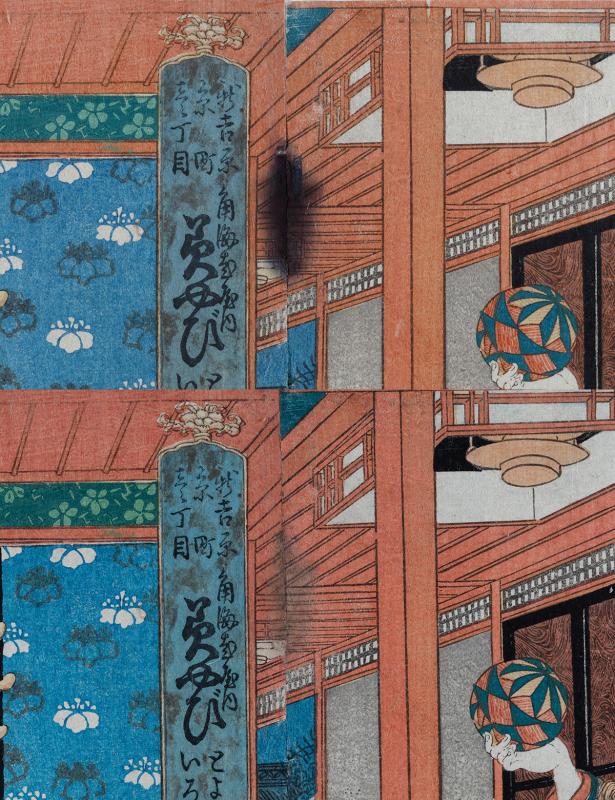 A triptych fragment before and after conservation 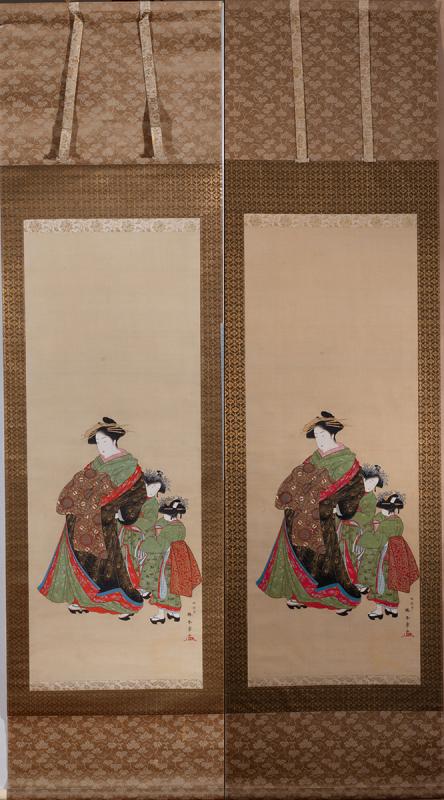 Courtesan with two maids before and after conservation

A beauty reading a letter before and after conservation