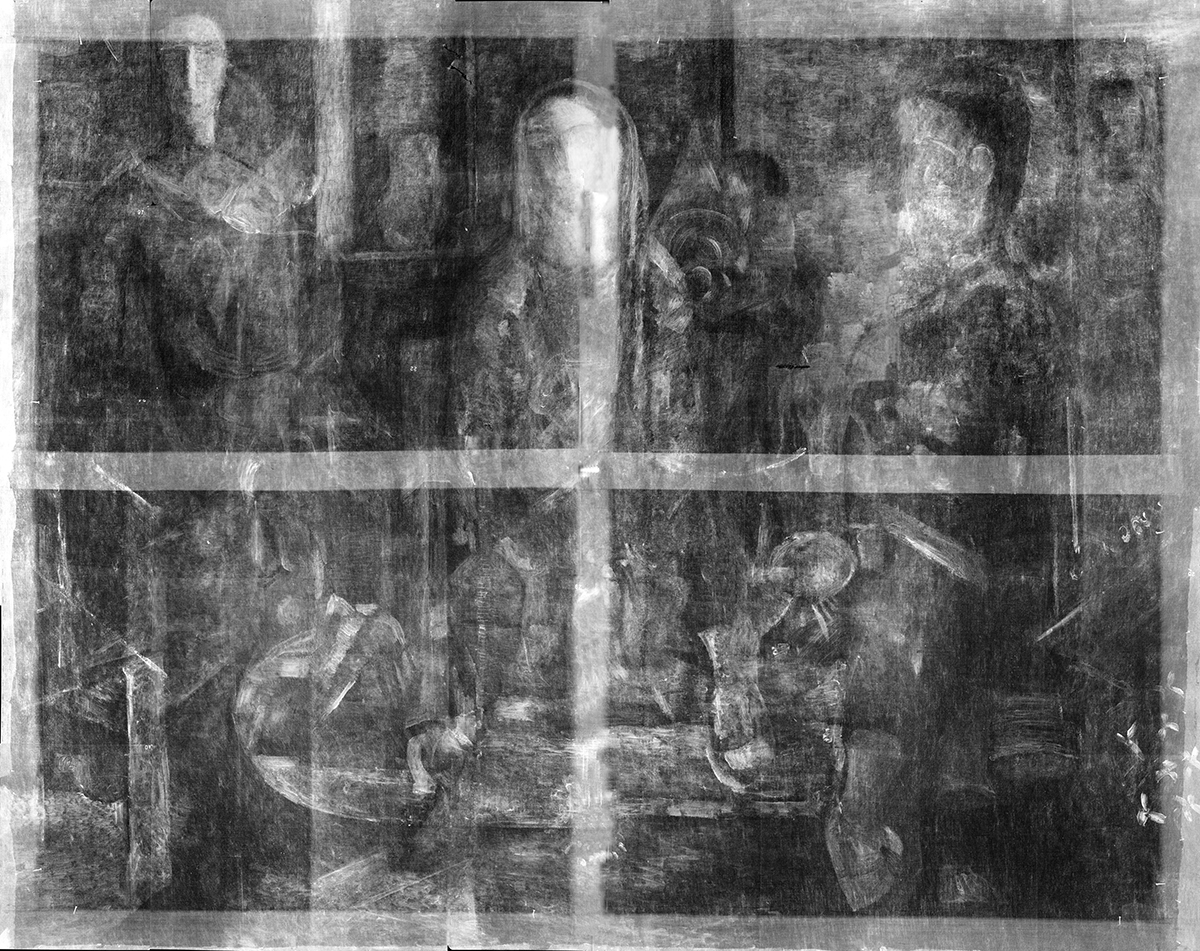 X-ray of the painting 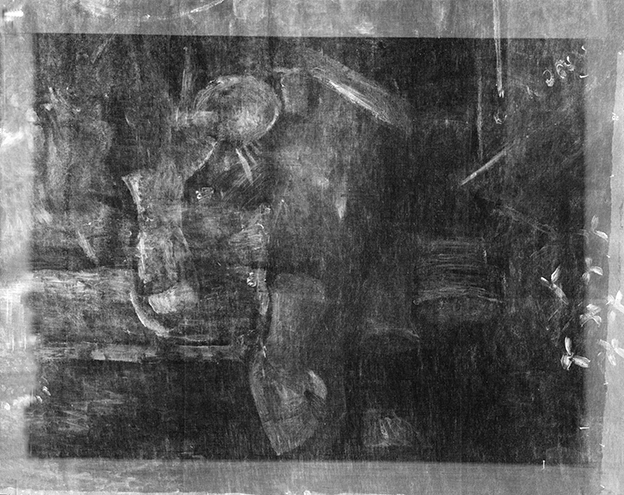 X-ray of the painting, fragment 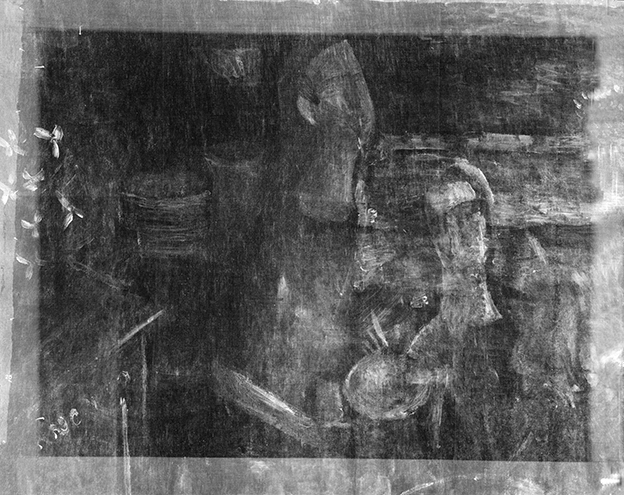 X-ray of the painting, fragment upside-down

André Derain 1904 - 1914. La décennie radicale is an exhibition that opened today, on the 4th of October, in Centre Georges Pompidou in Paris. The exhibition is covering the pre-war period of the French artist's work; the time when he took part in radical avant-garde art movements, experimenting with styles and art forms.

Out of the 70 paintings and other Derain's works exhibited in Centre Pompidou there are some landed for the exhibition by the Pushkin State Museum: Séchage des voiles or Les Barques de pêcheurs (The Drying Sails), Le Château (The Castle) and Le Samedi (Saturday), perhaps, the most interesting of all.

André Derain's Saturday is one of the most famous postimpressionists' paintings that belong to the museum. This massive artwork is a central piece and includes all the key elements of the artist's 'gothic' period, which preceded the First World War. Here is where the theme of an epic sacral event, in which Derain was immersed and which was connected to his study of world art and his own new impressions, is represented. Saturday is, perhaps, the most significant example of Derain's synthesis about which a Russian art historian Jacob Tugenhold said: "He gathers pollen from every flower, yet reinterprets it in his own way".

It is possible that the starting point for this work was Derain's impressions from the atmosphere of a priest's house in Vers near Cahors which the artist rented in the summer of 1912. Here was where the views from the windows, motifs of a green cloth cladded table, simple foods on inexpensive plates and dim interiors came from. This was the base upon which he laid the new meanings and associations.

The painting is filled with interceptions with global art traditions: hieratiс elongated figures, symbolism of the gestures, and inverted perspective are all related to Medieval art; early renaissance landscape motifs are easily recognizable, as well as African mask-like faces, and interpretation of Cézanne in drapes, fruit, textures of fabrics and furniture. An ordinary scene where a lady gives orders to her servant, and a young woman is busy sewing, obtains a metaphysical character of Coram Deo and turns into a hierurgy, which composition is built around a book (a missal?) placed in the center. The characters' figures dematerialize, fusing with the shadows, as if obtaining the features of ethereal spiritual beings. Contemporaries of the artist testified that Derain had worked on the painting for a very long time, constantly changing large areas of it completely; it is safe to assume that the artist had worked on it throughout entire year 1913.

Guillaume Apollinaire, a poet and a critic who appreciated Derain greatly and promoted his art, named the painting and printed its image in his magazine Soirees de Paris in 1914. The name Saturday in this case has many meanings: there is a whole range of possible interpretations – from the unhurried manner of provincial life to the sacrifice of Holy Saturday: the three women gathered around the table refer to The Three Marys who came to Christ's tomb in the morning after his resurrection.

This painting among seven other works of Derain became one of the final additions to Sergey Schukin's Moscow collection in the first half of 1914. The collection contained sixteen works of Derain (same number as those of Gauguin) and formed an independent ensemble in his house on Bolshoi Znamensky lane. The last interest of Schukin, Derain became symbolic for his collection.

Before conservation works could start we conducted several physical and chemical studies, as well as a mandatory visual examination.

During the latter, many parts with the author's alteration were found. The thick and textured brushstrokes of the first paint layer were painted over the lighter and thinner ones. In addition, the outlines of figures Derain painted originally are clearly visible under the top coat of paint. For example, in the bottom part of the painting we can see the outlines of heads under the image of the table, and in some areas even the colours of the underlying layers are visible.

In 1925 André Salmon wrote in his article on Derain: "...the famous Saturday, a masterpiece on which ever-inventive Derain had toiled without a thought of fame or recognition, and about which he said something worthy of the best quotes of Picasso: 'I have redone the painting anew; the meal has eaten the people.'" This phrase of the artist became especially significant after we had the results of the studies.

An x-ray confirmed radical alterations in the original composition. Under the upper paint layers there is an upside-down image of the original painting, which confirms André Salmon's testament: at some point while working on the painting Derain turned the canvas upside down and painted a new image that we see now on top of the old one. The arrangement and the size of the female figures are different in the two versions.

The subjacent composition (just like the one we see) consists of three figures placed in a room around an oval or round cloth-cladded table. The composition is centric: a woman with her head covered with a light cloth is placed directly in the centre. In the foreground, just like in the final version, there was an oval table covered with a tablecloth and with many different objects on top. It seems that the artist had painted and re-painted the still-life many times, as it is difficult to distinguish from the x-rays what exactly was depicted on the table. Judging by one fragment of this area on the x-ray it could be a still-life with fowl and cookware. The background of the original painting had a symmetrical composition with a console table or a fireplace behind the central female figure.

Studies of pigments from different parts of the canvas have shown that the colours of the subjacent paints were very different, too, much lighter and in greyish-greenish hues. Originally the painting had more colours overall, with predominantly bluish-green, baby blue, and reddish-brown shades. The tablecloth was not green, but brown. The woman to the left of the central figure was dressed in a blue dress and a bright red blouse or a scarf. For the body the artist at first used classical technique mixing white, red organic pigment and ochre to make shades of nude. In the final version the bare areas of bodies were painted more liberally with light and dark ochre.

Thanks to these studies museum visitors have now an undreamt-of before opportunity to see what the original idea of André Derain was, analyse the changes it had gone through, and compare it to the result of the artist's work.

Saturday was transferred to the conservation department in 2016. The main reason was the state of the canvas' edges: brittle, with many tears and ruptures, and traces of crude previous restorations and stretching, it needed immediate consolidation. Because of the state of the edges, which in some places began slipping off the nails, the tension of the canvas stretched on the underframe started to weaken: the canvas began to sag, deformations appeared, in some places the edges of old canvas ruptures began to shift. The defects were also on the surface of the painting: small flaking of the paint layer in different places, cracquelure with raised edges, blooming and deterioration of the varnish, and a large amount of grime on the surface. All of those significantly distorted aesthetical perception of the piece and, considering the painting's large size, constituted a serious threat to the possibility of exhibiting it in the future.

Before starting the main consolidation works, we had performed an emergency consolidation of the parts where flaking of the paint was a threat. When the painting was freed of the under frame it turned out that all four of its edges had patches made of dense grey canvas attached to it with wax. After the patches and the wax were removed, the dire state of the canvas' corners became even more obvious: the upper left corner was almost fully lost, the rest of them had numerous tears and ruptures from stretching and re-stretching of the canvas and the harmful impact of the wax. In the process of consolidation all the areas of loss were filled in, the tears consolidated and mended. The original margins were lined for support, and the deformations were fixed.

After consolidation, the painting was stretched onto an underframe, the areas of loss were filled, the grime was cleaned off, the varnish was restored and smoothened, there was also some retouching done.

As a result, the piece was consolidated and ready to be exhibited again: the colours became brighter and more saturated, some areas of painting that were not clear before because of the blooming and grime on the surface became visible once again.